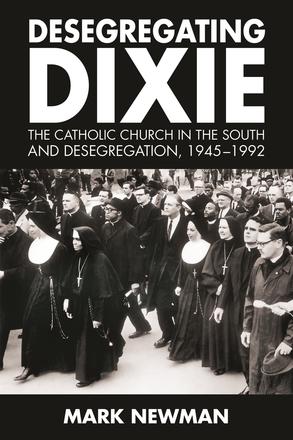 The Catholic Church in the South and Desegregation, 1945-1992

Mark Newman draws on a vast range of archives and many interviews to uncover for the first time the complex response of African American and white Catholics across the South to desegregation. In the late nineteenth and first half of the twentieth century, the southern Catholic Church contributed to segregation by confining African Americans to the back of white churches and to black-only schools and churches. However, in the twentieth century, papal adoption and dissemination of the doctrine of the Mystical Body of Christ, pressure from some black and white Catholics, and secular change brought by the civil rights movement increasingly led the Church to address racial discrimination both inside and outside its walls.

Far from monolithic, white Catholics in the South split between a moderate segregationist majority and minorities of hard-line segregationists and progressive racial egalitarians. While some bishops felt no discomfort with segregation, prelates appointed from the late 1940s onward tended to be more supportive of religious and secular change. Some bishops in the peripheral South began desegregation before or in anticipation of secular change while elsewhere, especially in the Deep South, they often tied changes in the Catholic churches to secular desegregation.

African American Catholics were diverse and more active in the civil rights movement than has often been assumed. While some black Catholics challenged racism in the Church, many were conflicted about the manner of Catholic desegregation generally imposed by closing valued black institutions. Tracing its impact through the early 1990s, Newman reveals how desegregation shook congregations but seldom brought about genuine integration.

"The book paves the way for even more studies of Catholicism in the US South and is essential reading for understanding Catholics and race in the twentieth-century United States. "

"Desegregating Dixie: The Catholic Church in the South and Desegregation, 1945–1992 is a seminal work that will be referenced by the laity, clergy, and scholars for years to come. Encyclopedic in scope, Desegregating Dixie has laid a foundation on which future generations of historians of US Catholicism may build. "

"The rich detail, concentrated local studies, careful analysis, and sobering conclusions all make this a book that should be a standard in the field. "

"Two particular strengths of the book are the chapter that compares the southern Catholic experience with that of southern Protestants, and the chapter that takes the narrative into the early 1990s. Both provide the monograph with a better perspective and include the same depth of research that makes Newman’s scholarship so impressive. The University of Mississippi Press should also be commended for the quality of the book and for including over one hundred pages of notes and a complete bibliography of sources. This book will be the standard on this subject for generations. "

"Newman's comprehensive work discusses many people, places, and events, and offers crucial context for anyone studying desegregation in the South. Overall, Desegregating Dixie is an essential resource for those concerned with race and religion in the South, Catholicism in the United States, and the civil rights movement. "

"Desegregating Dixie is a welcome addition to the growing historiography on Catholicism and the black freedom struggle in the U. S. South. Newman lays important groundwork for future research on the Catholic story of desegregation and organized white resistance to racial equality on the local level. "

"Mark Newman has written the definitive study of how the Roman Catholic Church variously resisted, assisted, and adapted to racial integration. This deeply researched and well-written book adds enormously to our understanding of the dynamics of racial change in the twentieth-century South. Newman has unearthed a complex, fascinating story, and he tells it exceedingly well. "

- Adam Fairclough, professor emeritus, Leiden University, and author of A Class of Their Own: Black Teachers in the Segregated South

"This is the first comprehensive treatment of the Catholic Church in the American South during the twentieth century’s ‘long civil rights movement. ’ Based on archival research in Catholic dioceses and archdioceses from Virginia to Texas, it incorporates voices of white and black Catholics alike. Rather than place ‘southern’ and ‘Catholic’ in opposition, as so many other scholars have done, Newman does a remarkable job capturing Catholics’ sometimes complicated relationship with the rest of the South. Newman’s nuanced argument reveals that desegregation’s impact was not overwhelmingly positive, since parish integration often meant the loss of institutions that had nurtured black community identity throughout the Jim Crow era. In short, this is a solid piece of scholarship, thorough in its research, judicious and fair in its judgments and conclusions, clear in presentation, opening new areas of inquiry that scholars will wrestle with for a long time to come. "

"Desegregating Dixie is a terrific volume that helps correct the tendency of southern historians to start and end with the stories of evangelical Protestants. "

- Ted Ownby, director, Center for the Study of Southern Culture, University of Mississippi

"For those invested in social and ecclesial change today, Desegregating Dixie offers a sobering account of the institutional church’s limitations, but also hope for long-term transformation."