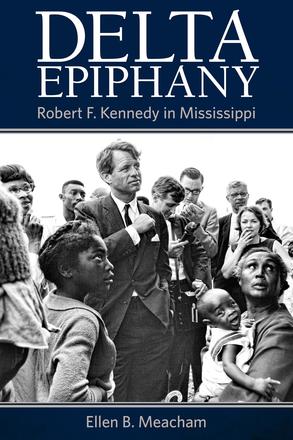 By Ellen B. Meacham

The story of Robert F. Kennedy’s consequential visit to the Mississippi Delta

In April 1967, a year before his run for president, Senator Robert F. Kennedy knelt in a crumbling shack in Mississippi trying to coax a response from a listless child. The toddler sat picking at dried rice and beans spilled over the dirt floor as Kennedy, former US attorney general and brother to a president, touched the boy's distended stomach and stroked his face and hair. After several minutes with little response, the senator walked out the back door, wiping away tears.

In Delta Epiphany: Robert F. Kennedy in Mississippi, Ellen B. Meacham tells the story of Kennedy's visit to the Delta, while also examining the forces of history, economics, and politics that shaped the lives of the children he met in Mississippi in 1967 and the decades that followed. The book includes thirty-seven powerful photographs, a dozen published here for the first time. Kennedy's visit to the Mississippi Delta as part of a Senate subcommittee investigation of poverty programs lasted only a few hours, but Kennedy, the people he encountered, Mississippi, and the nation felt the impact of that journey for much longer. His visit and its aftermath crystallized many of the domestic issues that later moved Kennedy toward his candidacy for the presidency. Upon his return to Washington, Kennedy immediately began seeking ways to help the children he met on his visit; however, his efforts were frustrated by institutional obstacles and blocked by powerful men who were indifferent and, at times, hostile to the plight of poor black children.

Sadly, we know what happened to Kennedy, but this book also introduces us to three of the children he met on his visit, including the baby on the floor, and finishes their stories. Kennedy talked about what he had seen in Mississippi for the remaining fourteen months of his life. His vision for America was shaped by the plight of the hungry children he encountered there.

In Delta Epiphany, with great detail and compassion, Ellen Meacham tells the story of Kennedy's visit to the Mississippi Delta, examining the forces that shaped the lives of the children he met, and how the national attention Kennedy's trip received would bring issues of hunger and poverty into the forefront of political discussions in the United States for years to come.

A natural storyteller, Meacham weaves all these narratives, along with necessary contextual background about Mississippi, race relations, poverty, and food policy, as well as RFK biography, into a satisfying whole.

Delta Epiphany is a well-researched and exceptionally well-written book. Meacham situates Kennedy’s visit to Mississippi in its local context without losing sight of the larger picture.

Ellen Meacham's book is superb. At its heart is the day in April 1967 in Mississippi when Robert Kennedy saw American children malnourished to a degree that would have been thought impossible in our nation. The story has been told before but not like this. The book is beautifully written, and Meacham tells the story in a depth not previously reached. She also nests it in a history and politics of racism and feudalism that explain how this American tragedy could happen and how it resulted in a national commitment to do better. I was there that day with Robert Kennedy, and I can testify firsthand. This is a must-read.

- Peter Edelman, Carmack Waterhouse Professor of Law and Public Policy at Georgetown University Law Center and author of Not a Crime to Be Poor: The Criminalization of Poverty in America

Ellen Meacham uses her superb talents as a historian and writer to record a transcendent but often overlooked (and sometimes forgotten) event in our state's conflicted history. It was the visit of Senator Robert Kennedy to Mississippi in the spring of 1967 to confront the grim face of hunger in the Mississippi Delta. It represented an epiphany for him but, even more compellingly, for so many of us white Mississippians who were around at the time.

Of all the books written about Robert Kennedy, Ellen Meacham's powerful Delta Epiphany is the only one that recognizes the impact that RFK's 1967 trip to impoverished Mississippi had on his transformation from ordinary politician into fervent champion for the underclass in America.

- Curtis Wilkie, author of The Fall of the House of Zeus: The Rise and Ruin of America's Most Powerful Trial Lawyer and Assassins, Eccentrics, Politicians, and Other Persons of Interest: Fifty Pieces from the Road