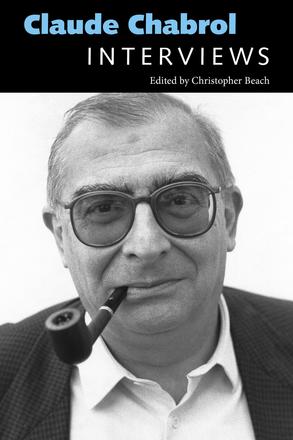 Claude Chabrol (1930–2010) was a founding member of the French New Wave, the group of filmmakers that revolutionized French filmmaking in the late 1950s and early 1960s. One of the most prolific directors of his generation, Chabrol averaged more than one film per year from 1958 until his death in 2010. Among his most influential films, Le Beau Serge, Les Cousins, and Les Bonnes Femmes established his central place within the New Wave canon. In contrast to other filmmakers of the New Wave such as Jean-Luc Godard and Eric Rohmer, Chabrol exhibited simultaneously a desire to create films as works of art and an impulse to produce work that would be commercially successful and accessible to a popular audience.

The seventeen interviews in this volume, most of which have been translated into English for the first time, offer new insights into Chabrol’s remarkably wide-ranging filmography, providing a sense of his attitudes and ideas about a number of subjects. Chabrol shares anecdotes about his work with such actors as Isabelle Huppert, Gérard Depardieu, and Jean Yanne, and offers fresh perspectives on other directors including Jean-Luc Godard, Fritz Lang, and Alfred Hitchcock.

His mistrust of conventional wisdom often leads him to make pronouncements intended as much to shock as to elucidate, and he frequently questions established ideas and normative attitudes toward moral, ethical, and social behaviors. Chabrol’s intelligence is far-reaching, moving freely between philosophy, politics, psychology, literature, and history, and his iconoclastic spirit, combined with his blend of sarcasm and self-deprecating humor, gives his interviews a tone that hovers between a high moral seriousness and a cynical sense of hilarity in the face of the world’s complexities.

Other Books By Christopher Beach