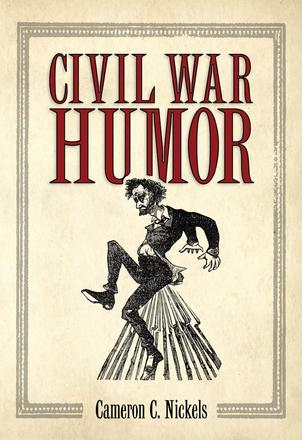 In Civil War Humor, author Cameron C. Nickels examines the various forms of comedic popular artifacts produced in America from 1861 to 1865, and looks at how wartime humor was created, disseminated, and received by both sides of the conflict. Song lyrics, newspaper columns, sheet music covers, illustrations, political cartoons, fiction, light verse, paper dolls, printed envelopes, and penny dreadfuls—from and for the Union and the Confederacy—are analyzed at length.

Nickels argues that the war coincided with the rise of inexpensive mass printing in the United States and thus subsequently with the rise of the country's widely distributed popular culture. As such, the war was as much a “paper war”—involving the use of publications to disseminate propaganda and ideas about the Union and the Confederacy's positions—as one taking place on battlefields. Humor was a key element on both sides in deflating pretensions and establishing political stances (and ways of critiquing them). Civil War Humor explores how the combatants portrayed Jefferson Davis and Abraham Lincoln, life on the home front, battles, and African Americans.

Civil War Humor reproduces over sixty illustrations and texts created during the war and provides close readings of these materials. At the same time, it places this corpus of comedy in the context of wartime history, economies, and tactics. This comprehensive overview examines humor's role in shaping and reflecting the cultural imagination of the nation during its most tumultuous period.

Civil War Humor offers a rich and diverse collection of primary materials, many previously unknown to scholars, even of the Civil War. An equal opportunity literary historian, Cameron Nickels presents not only a balanced treatment of the artifacts he features but also provides a reasoned analysis of these materials and always within apt historically contextual perspectives. Useful, entertaining, and reliably researched, Civil War Humor will remain not only the standard resource but also will stimulate further investigation on the subject.

- Ed Piacentino, The Register of the Kentucky Historical Society

The beauty of Civil War Humor is in Nickels's contextualization. By situating these songs and cartoons among the politics and customs of the time, Nickels ensures that readers 'get' the jokes both for their humor and their significant role as cultural artifacts. . . . Its readability, coupled with its depth of research and ample illustrations, makes Civil War Humor appealing for classroom use, academic audiences, and anyone interested in the armies and experience of the Civil War. Moreover, it is humorous itself, and serves as a timely reminder of the measures societies take to cope with the sobering aspects of warfare.

The author provides thorough documentation, crowding his pages with potent graphics, plentiful anecdotes, and examples of doggerel verse--all uncovered in his research. Avoiding critical analysis and abstract theorizing, always a problem in discussions of humor, Nickels has amassed a trove of material focused on concrete objects. Readers who want to draw their own conclusions by immersion in primary materials will love this accessible presentation, which is valuable to audiences ranging from academic to casual (including Civil War buffs). Highly recommended.