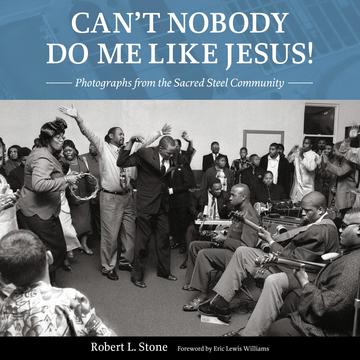 Photographs from the Sacred Steel Community

Folklorist Robert L. Stone presents a rare collection of high-quality documentary photos of the sacred steel guitar musical tradition and the community that supports it. The introductory text and extended photo captions in Can’t Nobody Do Me Like Jesus! Photographs from the Sacred Steel Community offer the reader an intimate view of this unique tradition of passionately played music that is beloved among fans of American roots music and admired by folklorists, ethnomusicologists, and other scholars.

In 1992, a friend in Hollywood, Florida, introduced Stone to African American musicians who played the electric steel guitar in the African American Holiness-Pentecostal churches House of God and Church of the Living God. With the passion, skill, and unique voice they brought to the instruments, these musicians profoundly impressed Stone. He produced an album for the Florida Folklife Program, which Arhoolie Records licensed and released worldwide. It created a roots music sensation.

In 1996, Stone began to document the tradition beyond Florida. He took the photos in this book from 1992 to 2008 in Georgia, the Carolinas, Tennessee, Mississippi, New York, Pennsylvania, Michigan, and Florida, and at concerts in Italy. The images capture musicians as they play for worship services before spirit-filled believers singing, dancing, shouting, praying, and testifying. Stone gives the viewer much to witness, always presenting his passionate subjects with dignity. His sensitive portrayal of this community attests to the ongoing importance of musical traditions in African American life and worship.

"Robert Stone's Can't Nobody Do Me Like Jesus! captures the pulse of the Jewell and Keith Dominion churches in lovely, richly tone, full-frame photographs. This book allows anyone who has not had the pleasure of joining a service to experience a taste of what 'praise music' is all about and for anyone who has experienced sacred steel music, this book will spark memories of why the event will forever stick in your mind"

"For fifteen years, Robert L. Stone documented House of God and Church of the Living God congregations, where electric steel guitars reign supreme among musical instruments for worship and celebration. His goodwill, impeccable research, and superb photography enabled him to capture a unique musical tradition that congregations have nurtured for several generations and that continues to thrive. Stone’s stunning images reveal the intense devotion of the steel guitarists, the subtleties of their interaction with other musicians and congregants, and the larger world of the churches, from dynamics of kinship and fellowship to architecture and sartorial style. This book offers a vivid testament to the power of music in the expression of communion and joy. "

- Stephen Stuempfle, author of The Steelband Movement and Port of Spain: The Construction of a Caribbean City

"Can’t Nobody Do Me Like Jesus! offers an elegant, sensitive, and deeply respectful portrait of music-making and worship in House of God (Keith Dominion) and Church of the Living God (Jewell Dominion) congregations—African American faith communities set apart by their embrace of the electric steel guitar as a primary instrument of praise. Drawing on nearly three decades of close engagement with these worship communities, folklorist Robert Stone has collaboratively crafted an intimate picture of praise, prayer, contemplation, and celebration in the Spirit. His images, while focusing on sacred steel guitarists, additionally capture the textured aesthetic worlds of these believers, stretching far beyond music to encompass dress, gesture, movement, and even architecture. Altogether, these photographs offer an eloquent visual testimony to these churchgoers’ faith, and to its spirited realization in the constancy and everydayness of worship. "

- Glenn Hinson, associate professor of folklore and American studies at the University of North Carolina, Chapel Hill, and author of Fire in My Bones: Transcendence and the Holy Spirit in African American Gospel

"When I first heard Bob Stone’s recordings of sacred steel music, it was like discovering a marvelous, magical world—the artists had a deep soul and power like nothing recorded since the golden ages of blues, gospel, and soul. Seeing these photographs, I am reminded that the music was part of a far larger world and am forever grateful to Stone for preserving so much beauty, dignity, and passion. "

- Elijah Wald, author of Escaping the Delta: Robert Johnson and the Invention of the Blues

"As a work of folklore study, Stone’s visual preservation of an otherwise little-known musical tradition within the African American Christian tradition is important. Can’t Nobody Do Me Like Jesus! serves well as a source for those interested in the visual depiction of praise and worship aesthetics within African American Christianity in general and AfroPentecostalism in particular. Stone’s visual documentation of the 1990s and 2000s makes a powerful companion piece to his previously completed recordings."