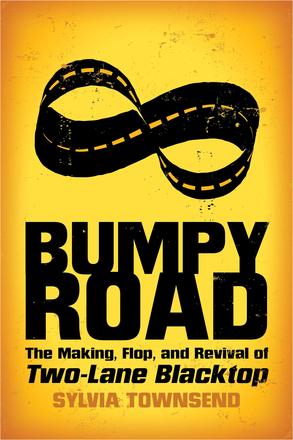 The Making, Flop, and Revival of Two-Lane Blacktop

Bumpy Road: The Making, Flop, and Revival of “Two-Lane Blacktop” chronicles the genesis, production, box-office debacle, resurrection, near-canonization, and lasting influence of director Monte Hellman’s 1971 existentialist car-racing movie. Hellman’s unconventional choices for the film included casting three nonactors—musicians James Taylor and Dennis Wilson, as well as his girlfriend, Laurie Bird—in lead roles; shooting the movie in sequence from west to east on Route 66; and refusing to show the actors the full script, instead giving each his or her lines for the day.

Before its release, Esquire put the film on its cover as the magazine’s choice for movie of the year and printed the entire screenplay, leading moviegoers to expect a crowd-pleaser. Audiences anticipated that Two-Lane Blacktop would be an action-packed car-racing movie and were disappointed when nobody won or even finished the race, no one got the girl, the two leading men barely spoke, and the leading lady was foul-mouthed and promiscuous. Universal Studios Chairman Lew Wasserman found the film subversive and refused to release it on video.

Years after it flopped, however, the movie soared in stature, and it is now revered by such contemporary directors as Quentin Tarantino and Richard Linklater. It was included in the National Film Registry and was released on DVD and Blu-ray by the prestigious Criterion Collection and the highly regarded Masters of Cinema series.

Author Sylvia Townsend conducts a comprehensive examination of the film, its reception, and the resurgence of interest it has more recently generated. Interviewing individuals involved in and influenced by the film, including James Taylor, Richard Linklater, Gary Kurtz, and scriptwriter Rudy Wurlitzer, Townsend provides an inside look at the cult classic.

Sylvia Townsend had the advantage of access to an extensive repository of documents regarding the making of Two-Lane Blacktop, as well as gathering new insights on the topic by conducting many interviews with participants involved at different stages with this film project. As such, Bumpy Road provides a useful guide to not only the genesis, release, and afterlife of Two-Lane Blacktop, but a dimensional study of independent filmmaker Monte Hellman.

A revealing, insightful, and very full account of how Monte Hellman’s most respected film—Two-Lane Blacktop—came into being and then over time earned an important place in the history of American cinema.