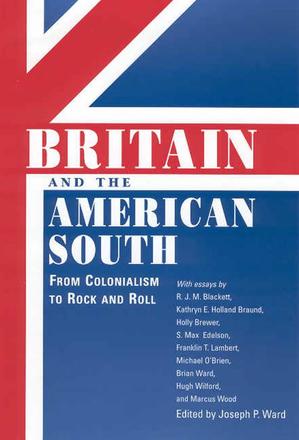 From Colonialism to Rock and Roll

Essays that track the long interrelationship between Britain and the American South in music, religion, and trade

Along with the Spanish and the French, the British were among the first Europeans to have contact with the native peoples in what would come to be known as the American South. During the seventeenth and eighteenth centuries, the British were intensively engaged in colonizing much of the region and developing its economy. The American Revolution severed the governmental links between Britain and its southern colonies, but economic, social, religious, and cultural ties persevered during the nineteenth and twentieth centuries.

Britain and the American South: From Colonialism to Rock and Roll illuminates Britain's evolving relationship with the South over a period of four centuries, an era that witnessed Britain's rise to imperial dominance and then the gradual erosion of its influence on the wider world. It considers the British influence upon—and often critical responses to—southern institutions and cultural formations such as religion, gentility, slavery, and music.

Two chapters focus on Britain's response to the Confederacy, while other essays look even further into the past, concentrating on the English legacy in colonial times, its influence on southern religion, and Britain's relationship with the Creek Indians. Moving into the twentieth century, the book features analysis of the South's relationship to the British Left from 1930 to 1960, and an investigation of the South's role in 1950s British popular music.

With an engaging afterword that explores the difficulties in comprehending both Britain and the American South in the present day as well as in the past, this book shows that the relationship between the two has always been—and continues to be—complex, subtle, and meaningful.

Other Books By Joseph P. Ward