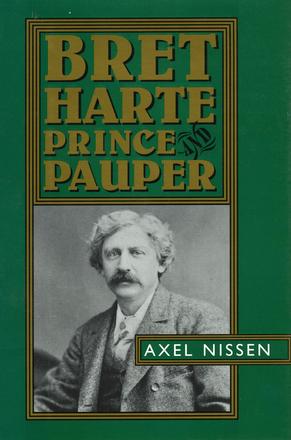 A biography that charts the boom and bust of America’s first celebrity author, once Mark Twain’s chief rival in American literature

A biography that charts the boom and bust of America's first celebrity author, once Mark Twain's chief rival in American literature

In this first scholarly biography of Bret Harte in nearly seventy years, Axel Nissen sets out to reevaluate the life and literary career of the legendary chronicler of the California gold rush.

After his sensational breakthrough in the late 1860s, Harte came to symbolize the self-made literary man. He was a Midas of the pen and a literary prince of the Gilded Age. With "The Luck of Roaring Camp," "Tennessee's Partner," and "The Outcasts of Poker Flat" he reinvented the American short story and laid the foundations for the Western. In the age of mass-circulation newspapers he became America's first worldwide celebrity author. His stories were reprinted all over the globe, and his sayings and doings were reported in the press. His handsome face adorned newspaper columns, and his image was sold as an over-the-counter souvenir.

Based on extensive new sources, Nissen's biography gives a vivid account of Harte's tumultuous life from his birth in Albany, N. Y., in 1836 until his death in a sleepy English village in 1902. Exploring mysterious and previously unresearched areas, Nissen shines a bright light into the many dark corners of the life of this enigmatic nineteenth-century icon. Harte was the best-paid author of his day, but financial insolvency forced him into exile in Europe as a diplomat. For twenty years he lived in London, where he was the darling of the English aristocracy but remained apart from his wife and children. Nissen focuses on Harte's love-hate relationship with Mark Twain and examines the homoerotic element in his life and work. He also offers a satisfying account of why Harte became so famous in his own time and why in ours he has suffered a decline.

Harte aroused strong and conflicting feelings in those who knew him. William Dean Howells felt he was a blithe spirit who burned his candle at both ends. Mark Twain thought him "the most contemptible, poor little soulless blatherskite that exists on the planet today. " Henry Adams considered Harte one of the most brilliant men of his time. To a reviewer of an early biography he was a "fugitive from home. " To the bigot aware of Harte's mixed ethnic heritage he was a "Hebrew. " To the average dresser he was a fop. To the pious he was a purveyor of "moral filth. " To the reader of this innovative biography Harte comes alive both as a fascinating figure and an author ripe for revival.

Axel Nissen is an associate professor of American literature at the University of Oslo. In 1997 his doctoral thesis was awarded H. M. the King of Norway's Gold Medal.