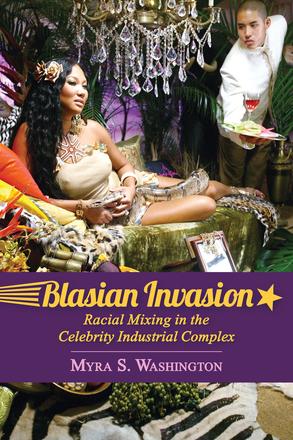 An exposition of a dynamic multiracial identity

Myra S. Washington probes the social construction of race through the mixed-race identity of Blasians, people of Black and Asian ancestry. She looks at the construction of the identifier Blasian and how this term went from being undefined to forming a significant role in popular media. Today Blasian has emerged as not just an identity Black/Asian mixed-race people can claim, but also a popular brand within the industry and a signifier in the culture at large. Washington tracks the transformation of Blasian from being an unmentioned category to a recognized status applied to other Blasian figures in media.

Blasians have been neglected as a meaningful category of people in research, despite an extensive history of Black and Asian interactions within the United States and abroad. Washington explains that even though Americans have mixed in every way possible, racial mixing is framed in certain ways, which almost always seem to involve Whiteness. Unsurprisingly, media discourses about Blasians mostly conform to usual scripts already created, reproduced, and familiar to audiences about monoracial Blacks and Asians.

In the first book on this subject, Washington regards Blasians as belonging to more than one community, given their multiple histories and experiences. Moving beyond dominant rhetoric, she does not harp on defining or categorizing mixed race, but instead recognizes the multiplicities of Blasians and the process by which they obtain meaning. Washington uses celebrities, including Kimora Lee, Dwayne Johnson, Hines Ward, and Tiger Woods, to highlight how they challenge and destabilize current racial debate, create spaces for themselves, and change the narratives that frame multiracial people. Finally, Washington asserts Blasians as evidence not only for the fluidity of identities, but also for the limitations of reductive racial binaries.

[Washington] proves that racial theory benefits from examining multiracial identities as sites of cultural disruptions because, as she explains, 'Blasians explode the narrow boundaries of authenticity around racialized categories. ' In disrupting racial boundaries, Blasians offer us alternative ways of understanding alliances—one in which multiple subjectivities are taken into account. Finally, this work enriches critical mixed-race studies greatly by giving better legibility to scholarship on non-White racially mixed people.

Myra S. Washington makes a significant contribution in combining several discourses that are often not discussed together: popular culture, mixed-race studies, and critical race theory. Within the burgeoning field of critical mixed-race studies, the focus has been literary, historical, and visual, so Washington's intervention in terms of popular culture through a focus on celebrity culture is a welcome addition. I'm very glad to see a specific attention on mixed-race issues that look at non-white minority mixings--in other words, Washington's specific intervention is in thinking about multiraciality outside the sphere of whiteness (but of course the ways in which whiteness intervenes within these discourses in larger society).

- Jennifer Ho, professor in the Department of English and Comparative Literature at University of North Carolina at Chapel Hill and author of three books, including Racial Ambiguity in Asian American Culture