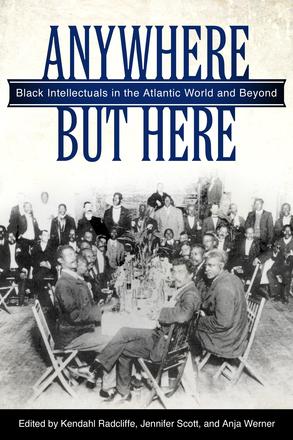 Black Intellectuals in the Atlantic World and Beyond

Anywhere But Here brings together new scholarship on the cross-cultural experiences of intellectuals of African descent since the eighteenth century. The book embraces historian Paul Gilroy's prominent thesis in The Black Atlantic: Modernity and Double-Consciousness and posits arguments beyond The Black Atlantic's traditional organization and symbolism. Contributions are arranged into three sections that highlight the motivations and characteristics connecting a certain set of agents, thinkers, and intellectuals: the first, Re-ordering Worldviews: Rebellious Thinkers, Poets, Writers, and Political Architects; the second, Crafting Connections: Strategic and Ideological Alliances; and the third, Cultural Mastery in Foreign Spaces: Evolving Visions of Home and Identity.

These essays expand categories and suggest patterns at play that have united individuals and communities across the African diaspora. They highlight the stories of people who, from their intercultural and often marginalized positions, challenged the status quo, created strategic (and at times, unexpected) international alliances, cultivated expertise and cultural fluency abroad, as well as crafted physical and intellectual spaces for their self-expression and dignity to thrive.

What, for example, connects the eighteenth-century Igbo author Olaudah Equiano with 1940s literary figure Richard Wright; nineteenth-century expatriate anthropologist Antenor Fermin with 1960s Haitian émigrés to the Congo; Japanese Pan-Asianists and Southern Hemisphere Aboriginal activists with Jamaican-born Marcus Garvey; or Angela Davis with artists of the British Black Arts Movement, Ingrid Pollard and Zarina Bhimji? They are all part of a mapping that reaches across and beyond geographical, historical, and ideological boundaries typically associated with the “Black Atlantic.” They reflect accounts of individuals and communities equally united in their will to seek out better lives, often, as the title suggests, “anywhere but here.”