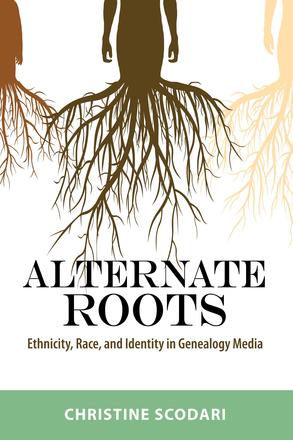 How popular media cultivates genealogy but buries its cultural context

In recent years, the media has attributed the increasing numbers of people producing family trees to the aging of baby boomers, a sense of mortality, a proliferation of internet genealogy sites, and a growing pride in ethnicity. A spate of new genealogy-themed television series and internet-driven genetic ancestry testing services have now emerged, capitalizing on the mapping of the human genome in 2003. This genealogical trend poses a need for critical analysis, particularly along the lines of race and ethnicity.

In contextual ways, as she intersperses an account of her own journey chronicling her Italian and Italian American family history, Christine Scodari lays out how family historians can understand intersections involving race and/or ethnicity and other identities inflecting families. Through engagement in and with genealogical texts and practices, such as the classic television series Roots, Ancestry. com, and Henry Louis Gates’s documentaries, Scodari also explains how to interpret their import to historical and ongoing relations of power beyond the family. Perspectives on hybridity and intersectionality gesture toward making connections not only between and among identities, but also between localized findings and broader contexts that might, given only cursory attention, seem tangential to chronicling a family history.

Given current tools, texts, practices, cultural contexts, and technologies, Scodari’s study determines whether a critical genealogy around race, ethnicity, and intersectional identities is viable. She delves into the implications of adoption, orientation, and migration while also investigating her own genealogy, examining the racial, ethnic experiences of her forebears and positioning them within larger, cross-cultural contexts.

There is little research on genealogical media in relation to race and ethnicity. Thus, Scodari blends cultural studies, critical media studies, and her own genealogy as a critical pursuit to interrogate issues bound up in the nuts-and-bolts of engaging in family history.

This slim, engaging volume tracks the development and spread of practices related to genealogies using an autoethnographic, textual approach. Scodari (media and women’s studies, Florida Atlantic Univ. ) makes the case for conducting family histories in her role as a scholar, tracing how her interest emerged. While providing an overview of the major impetuses, players, and trends in genealogy, the book also interrogates their precepts. Popular engagement with family history can preclude a critical stance, which is why an autoethnographic, theoretically grounded approach to a genealogical excavation merits interest. Four chapters address media representations and practices. In two others Scordari emphasizes ‘race, ethnicity, and intersectional identities’ in the areas of ‘family history television’ and ‘genealogy television migration narratives,’ along with related practices and texts. The remaining two chapters deal with ‘identity and genetic ancestry’ in either ‘digital media’ or ‘genealogy television. ’ By way of pointing up certain critical trajectories and applying practices, methods, and discoveries to her own life history, Scodari models the ways students can engage their own genealogies. The pointed critique of these practices is self-reflexive without being stymieing, certainly an aspiration for undergraduate research. Useful for collections in history, American studies, ethnic studies, and anthropology.

People have always been interested in who they are and where they come from, and thus genealogical study holds great fascination. In her short and remarkable book, Christine Scodari places the historic journey of her own Italian family into a larger context, shedding light on genealogical theory; personal, social, and immigration history; religious practices; and gender, class, and race issues. She also unlocks the secrets behind the popularity of celebrity genealogy shows and explores ways in which the social hierarchies that begin in one’s own family reflect past generations as well as modern times. Her book will appeal to anyone wanting to better understand connections between family and culture.