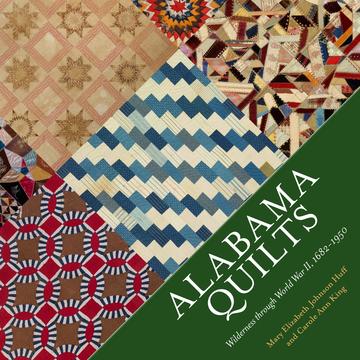 Winner of the 2022 James F. Sulzby Book Award from the Alabama Historical Association

Alabama Quilts: Wilderness through World War II, 1682–1950 is a look at the quilts of the state from before Alabama was part of the Mississippi Territory through the Second World War—a period of 268 years. The quilts are examined for their cultural context—that is, within the community and time in which they were made, the lives of the makers, and the events for which they were made.

Starting as far back as 1682, with a fragment that research indicates could possibly be the oldest quilt in America, the volume covers quilting in Alabama up through 1950. There are seven sections in the book to represent each time period of quilting in Alabama, and each section discusses the particular factors that influenced the appearance of the quilts, such as migration and population patterns, socioeconomic conditions, political climate, lifestyle paradigms, and historic events. Interwoven in this narrative are the stories of individuals associated with certain quilts, as recorded on quilt documentation forms. The book also includes over 265 beautiful photographs of the quilts and their intricate details.

To make this book possible, authors Mary Elizabeth Johnson Huff and Carole Ann King worked with libraries, historic homes, museums, and quilt guilds around the state of Alabama, spending days on formal quilt documentation, while also holding lectures across the state and informal “quilt sharings.” The efforts of the authors involved so many community people—from historians, preservationists, librarians, textile historians, local historians, museum curators, and genealogists to quilt guild members, quilt shop owners, and quilt owners—making Alabama Quilts not only a celebration of the quilting culture within the state but also the many enthusiasts who have played a role in creating and sustaining this important art.

"The coauthors start with the first known Alabama quilt, brought into the state (long before statehood) from New England, and end in 1950, when quilting fell out of fashion because it reminded folks of ‘making do’ during the Depression. In between, they highlight creations from different communities, including a colorful Chariot Wheel of red and blue checks against a green cotton background contributed by a Native American, and an example of the Pig Pen design popular with African American quilters, in which ‘rows of horizontal and vertical bars’ surround a central block ‘of four or six patches in alternating light and dark values. ’ They also illuminate historical context, as with Civil War–era gunboat quilts (made during a fundraising drive to build the Confederate fleet) and WWII-era feed-sack quilts (an adaptation to wartime rationing). History and craft buffs will be enthralled with this superb overview. "

"Alabama Quilts makes a significant contribution to our understanding of the history of American quilt making. The histories of the quilts and their makers are set solidly within the context of Alabama’s history, and many of the quilts described are noteworthy in terms of style, construction, and history. Readers will prize this book for its remarkable personal stories and color photos of quilts."

"The details the authors include, and the sources they use, led me to believe that researching the quilts’ histories was an exciting puzzle for Huff and King. Each quilt’s carefully researched descriptive essay could easily be a case study of how to research a community around a quilt, where to find the information, and possibilities for more sources using the quilt documentation process. The 160 quilts pictured are beautiful to see and appropriate to the storytelling." 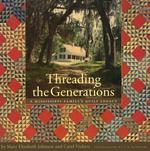