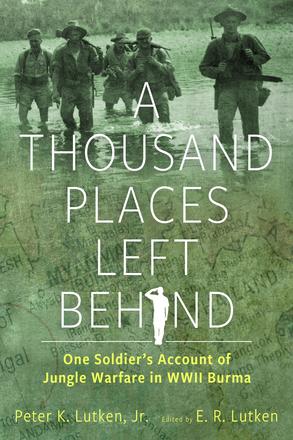 One Soldier’s Account of Jungle Warfare in WWII Burma

A veteran's harrowing remembrance of jungle warfare and intelligence operations

Born and raised in Mississippi, Peter K. Lutken, Jr. (1920–2014) joined the army in 1941 and was assigned to the Coast Artillery. Originally sent to India to guard airfields, he was reassigned to the British V Force, then the American OSS (Office of Strategic Services and precursor to the CIA) after he volunteered for reconnaissance missions behind Japanese lines. Skills he had learned as a boy in the backwoods and swamps around the Pearl River stood him in good stead, and by the end of the war, he attained the rank of major, commanding an entire battalion of ethnic Kachins and other local people of northern Burma (now called Myanmar).

Lutken's stories carry the reader along as he sails on a troop ship to India, then treks into the mountainous jungles of northern Burma to gather intelligence and engage in guerrilla warfare with the Japanese. In his straightforward way, he describes how he learned the language of the Kachins and much about their customs and legends, and how he fought alongside them for the course of the war. Adventures of rafting uncharted rivers, surprise attacks, sabotage, natural hazards and disease, feasts and ceremonies, the plight of refugees, and tragic events of war are all told from the perspective of a young soldier, who finds himself half a world away from home.

Based on hundreds of pages of transcripts from tapes recorded late in his life, A Thousand Places Left Behind recounts the untold story not just of one soldier’s experiences, but of the little-known history of American and British forces in Burma during World War II. Supported by original maps based on Lutken’s personal travels as well as photographs from his scrapbook, the book traces Lutken’s journey overseas, his expeditions into the jungle, and his return to Jackson, Mississippi in 1945. Beyond the war, Lutken’s connection with the Kachins culminated in “Project Old Soldier,” a crop exchange program which he and other veterans of OSS Detachment 101 initiated in the 1990s and which lasted until after his death in 2014. The book tells a remarkable story of bravery, friendship, history, and the unbreakable bonds forged in times of war.

"A Thousand Places Left Behind is absolutely fascinating. Any serious World War II student needs to read this interesting, at times astounding, book."

"A Thousand Places Left Behind is a well-written, engaging memoir of a Mississippi-born man thrown into World War II. Lutken's experiences in unconventional warfare and as an American in V Force offer a unique perspective in World War II historiography."

- Troy J. Sacquety, author of The OSS in Burma: Jungle War against the Japanese