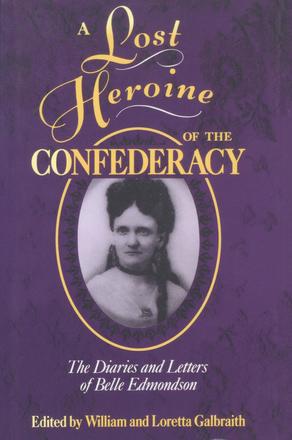 A Lost Heroine of the Confederacy

The Diaries and Letters of Belle Edmondson

This collection of exciting letters and diaries documents Belle Edmondson's active role behind the scenes in the Civil War and reveals her to have been a courier, a gatherer of intelligence, and a smuggler of contraband on behalf of southern troops in west Tennessee.

In an era that glorified Southern womanhood, especially the women who contributed significantly to the Confederate cause, the of this fascinating book, until now, somehow has been largely forgotten.

These are the papers that survived her, and they detail the life and deeds of Belle Edmondson (1840-1873), a heroine of the Confederacy. This collection consists of her diaries for 1863 and 1864 and the letters she received between 1861 and 1864. They document her active role behind the scenes in the Civil War and reveal her to have been a courier, a gatherer of intelligence, and a smuggler of contraband in behalf of Southern troops in West Tennessee.

Of all the correspondence, the most valuable letters are those from one "Captain Henderson. " These request copies of Northern newspapers, as well as Belle's reports on enemy activities in Memphis, details about local skirmishes and conditions in the camps, and her reports of activities on nearby battle fronts. These are letters of a very literate writer with a flair for recording immediate detail.

Though Belle Edmondson was praised for her valuable services as a Florence Nightingale of the war and was told that her good deeds would last "while our country stands," with the end of the war she was forgotten. She dies in 1873, shortly after announcing her engagement to a Colonel H. , who perhaps was a Yankee.

A Lost Heroine of the Confederacy brings Belle Edmondson back to life and points to the deeds of a Southern woman who chose an active role in the cause she served.