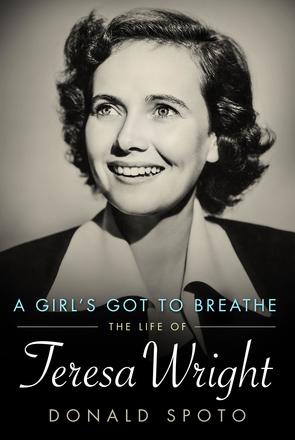 A Girl's Got To Breathe

The Life of Teresa Wright

A biography of the Oscar-winning American actress

The actress Teresa Wright (1918–2005) lived a rich, complex, magnificent life against the backdrop of Golden Age Hollywood, Broadway and television. There was no indication, from her astonishingly difficult—indeed, horrifying—childhood, of the success that would follow, nor of the universal acclaim and admiration that accompanied her everywhere. Her two marriages—to the writers Niven Busch (The Postman Always Rings Twice; Duel in the Sun) and Robert Anderson (Tea and Sympathy; I Never Sang for My Father)—provide a good deal of the drama, warmth, poignancy and heartbreak of her life story.

“I never wanted to be a star,” she told the noted biographer Donald Spoto at dinner in 1978. “I wanted only to be an actress. ” She began acting on the stage in summer stock and repertory at the age of eighteen. When Thornton Wilder and Jed Harris saw her in an ingénue role, she was chosen to understudy the part of Emily in the original production of Our Town (1938), which she then played in touring productions. Samuel Goldwyn saw her first starring role on Broadway—in the historic production of Life with Father—and at once he offered her a long contract.

She was the only actress to be nominated for an Academy Award for her first three pictures (The Little Foxes; The Pride of the Yankees; and Mrs. Miniver), and she won for the third film. Movie fans and scholars to this day admire her performance in the classics Shadow of a Doubt and The Best Years of Our Lives. The circumstances of her tenure at Goldwyn, and the drama of her breaking that contract, forever changed the treatment of stars.

"Prolific celebrity biographer Spoto (The Redgraves: A Family Epic) paints an engaging and intimate portrait of Oscar-winning actor Teresa Wright. Her notable film roles included Shadow of a Doubt, The Best Years of Our Lives, and The Pride of the Yankees, in which she improvised her famous line, 'A girl's gotta breathe!', after receiving a lengthy on-screen kiss from costar Gary Cooper. . . . [Spoto] depicts Wright as a unique and hardworking talent who shied away from the spotlight. As he describes her, she embodied the buoyant and determined spirit of mid-twentieth-century America, and her fresh-faced beauty was warmly embraced by contemporary audiences. "

"This affectionate tribute to a shamefully neglected talent benefits greatly from the insights of Wright's children and friends. With the performer's views on Marlon Brando, Sterling Hayden, and notable American directors and playwrights, it is recommended for students of American film and theater. "

"In between the standard celebrity-bio synopsis of every one of Wright's roles, prolific entertainment biographer Spoto (The Redgraves, 2012) creates a respectable study of a woman who may not have realized the happiness she desired in her personal life, but whose professional accomplishments cannot be denied. A worthwhile read for fans of Hollywood's Golden Age. "

"A Girl's Got To Breathe is as much memoir as biography, but the intimacy works. Wright's talent and yearnings come alive on the page. "

"Anyone at all interested in Wright will likely be delighted by this compactly written volume. But it also tells well the story of the private woman, and that story also turns out to be of considerable interest. "

"Teresa Wright's long career is lovingly recreated in this warm and revealing biography that is a tribute to her art and a record of her longtime friendship with the author. A Girl's Got To Breathe is one of Donald Spoto's most insightful and personal biographies and a portrait of an artist who can truly be called a 'working actress. '"

- Bernard F. Dick, author of The Screen Is Red: Hollywood, Communism, and the Cold War

"Teresa Wright projected a kind of gentle incandescence and, simultaneously, a tacit, unyielding strength. She was a real actor who could conjure both a glowing sympathy and a winning toughness--qualities that are unforgettable in the great Hitchcock classic Shadow of a Doubt, to name but one of her many enduring achievements. Donald Spoto's revelations about the woman's stunning and tragic family history make it all the more apparent that she was an artist with an extraordinary gift for transcendence. "

- Mart Crowley, playwright, The Boys in the Band

"Teresa Wright was one of the great American actresses. She's finally received her due in Donald Spoto's charming and incisive biography. "