Bruce West is a professor in the Department of Art and Design at Missouri State University. His photographs have appeared in numerous exhibitions throughout the United States and Europe and are included in museum collections such as the Ogden Museum of Southern Art, the Library of Congress, the Nelson-Atkins Museum of Art, and the Victoria and Albert Museum. His photographs have appeared in American Photography 14; The Next Generation: Contemporary Expressions of Faith; and For, From, About James T. Whitehead: Poems, Stories, Photographs, and Recollections. 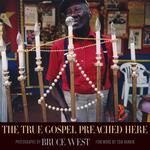