Terrence R. Wandtke is professor of English and communication at East-West University in Chicago, Illinois, where classes taught include science fiction and senior seminar, which is focused on technology and humanity. He previously founded and directed the Imago Film Festival, served as the area chair of Comics and Comic Art for the Popular Culture Association Conference, and currently acts as editor of the Comics Monograph Series for the Rochester Institute of Technology. He is author of The Comics Scare Returns: The Resurgence in Contemporary Horror Comics, The Dark Night Returns: The Contemporary Resurgence in Crime Comics, and The Meaning of Superhero Comic Books. He is editor of Robert Kirkman: Conversations and Ed Brubaker: Conversations, both published by University Press of Mississippi, and The Amazing Transforming Superhero: Essays on the Revision of Characters in Comic Books, Film, and Television. 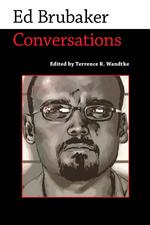