Howard Philips Smith grew up on a farm in rural Mississippi and attended the University of Southern Mississippi and the Université de Bourgogne, Dijon. He began writing about pre-AIDS New Orleans and the gay ball scene during the early 1980s, the so-called Golden Age of Gay Carnival. He is author of Unveiling the Muse: The Lost History of Gay Carnival in New Orleans, published by University Press of MIssissippi, and coauthor of Southern Decadence in New Orleans. He lives in Los Angeles with his husband and three cats. 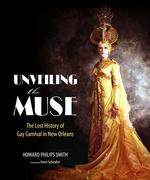