Nicholas Parisi serves as president of the Rod Serling Memorial Foundation, a charitable organization dedicated to preserving and promoting Rod Serling’s legacy. He is a former staff writer and editor for Good Times magazine in Long Island. He has appeared on several television series, radio shows, and podcasts, including CBS’s Inside Edition, Coast to Coast AM, and Gilbert Gottfried’s Amazing Colossal Podcast. He is also an accomplished musician and vocalist, having performed on stage hundreds of times. In 2010, his former band, Arioch, released a CD with the Serling-inspired title, Between Light and Shadow, on Retrospect Records. 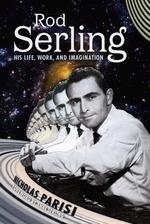