Chris Murray is professor of comics studies at the University of Dundee and director of the Scottish Centre for Comics Studies. Murray is author of Champions of the Oppressed: Superhero Comics, Popular Culture, and Propaganda in America During World War II. He is also editor of UniVerse Comics, coeditor of Studies in Comics (Intellect), and co-organizer of the International Comics and Graphic Novel conference. 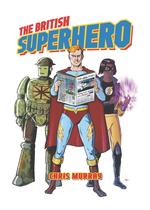