Mike Miley teaches literature at Metairie Park Country Day School and film studies at Loyola University New Orleans. He is author of Truth and Consequences: Game Shows in Fiction and Film and coeditor of Conversations with Steve Erickson, both published by University Press of Mississippi. His work has appeared in TheAtlantic.com, Critique, Literature/Film Quarterly, Music and the Moving Image, the Smart Set, and elsewhere. While he has never appeared on a game show, he has dominated many a trivia night. 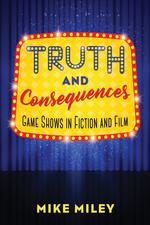