Jim Lucas (1944-1980) started photographing for the Jackson Daily News while he was still in high school. A student at Millsaps College when the nation was focused on Mississippi and the search for three missing civil rights workers, Lucas met and assisted film cameramen from CBS News that summer of 1964. He continued to cover local marches, pickets, planning meetings, and bombings until 1968. Serving in Vietnam in the Army Signal Corps, he was named Military Newsfilm Motion Picture Photographer of the Year in 1969. Returning to Mississippi, he pursued freelance film work and work in motion picture feature films. 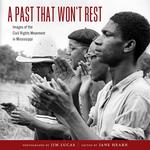 A Past That Won't Rest