Tim Lanzendörfer is assistant professor of American studies at the Obama Institute for Transnational American Studies at the University of Mainz, Germany. His book The Professionalization of the American Magazine: Periodicals, Biography, and Nationalism in the Early Republic won the 2013–2014 Research Society for American Periodicals’ Book Prize, which recognizes the best title published by an academic press in the field of American periodical studies. 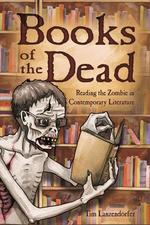 Books of the Dead