Edward F. Haas is professor of history at Wright State University and the author of numerous books on Louisiana and New Orleans, including Delesseps S. Morrison and the Image of Reform: New Orleans Politics, 1946-1961 and Political Leadership in a Southern City: New Orleans in the Progressive Era. He received in 1999 the Garnie McGinty Lifetime Service Award from the Louisiana Historical Association and is a past president and fellow of the organization. 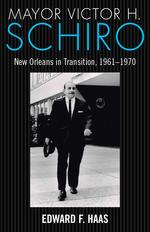