Marc DiPaolo is assistant professor of English at Southwestern Oklahoma State University. He is author of Fire & Snow: Climate Fiction from the Inklings to ‘Game of Thrones”; War, Politics, and Superheroes: Ethics and Propaganda in Comics and Film; and Emma Adapted: Jane Austen’s Heroines from Book to Film. He has edited five collections of scholarly essays on intersections of film, literature, politics, and religion, and he has been interviewed on NPR and BBC 4. 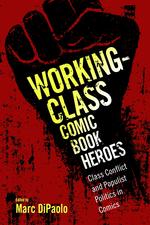