David M. Ball is editor of the Critical Approaches to Comics Artists Series and coeditor (with Martha B. Kuhlman) of The Comics of Chris Ware: Drawing Is a Way of Thinking, both published by University Press of Mississippi. He is also author of False Starts: The Rhetoric of Failure and the Making of American Modernism, published by Northwestern University Press. His essays and reviews have appeared in The Cambridge History of the Graphic Novel, The Oxford Handbook of Comic Book Studies, The Journal of Modern Literature, Modern Fiction Studies, Artforum, The Los Angeles Review of Books, and elsewhere. He is currently working on a monograph about the intersections of comics and literary and artistic modernism. He teaches at Punahou School in Honolulu, Hawaii. 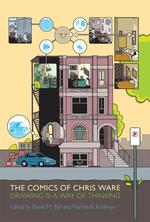 The Comics of Chris Ware