Bob Avian (1937–2021) was an award-winning Broadway choreographer known for his work on A Chorus Line, Miss Saigon, and Sunset Boulevard. He began his career on Broadway as a dancer in such classic shows as West Side Story, Funny Girl, and Hello, Dolly! He also served as an original producer of Dreamgirls in 1981 and directed the Broadway and London revivals of A Chorus Line in 2006 and 2013. 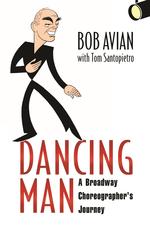