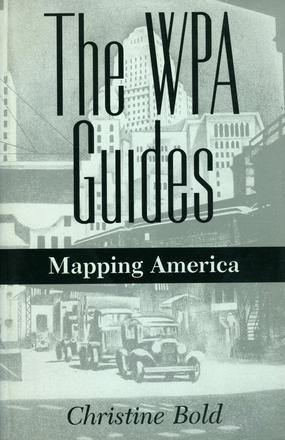 In 1935 the FDR administration put 40,000 unemployed artists to work in four federal arts projects. The main contribution of one unit, the Federal Writers Project, was the American Guide Series, a collectively composed set of guidebooks to every state, most regions, and many cities, towns, and villages across the United States.

The WPA arts projects were poised on the cusp of the modern bureaucratization of culture. They occurred at a moment when the federal government was extending its reach into citizens' daily lives. The 400 guidebooks the teams produced have been widely celebrated as icons of American democracy and diversity. Clumped together, they manifest a lofty role for the project and a heavy responsibility for its teams of writers. The guides assumed the authority of conceptualizing the national identity.

In The WPA Guides: Mapping America Christine Bold closely examines this publicized view of the guides and reveals its flaws. Her research in archival materials reveals the negotiations and conflicts between the central editors in Washington and the local people in the states. Race, region, and gender are taken as important categories within which difference and conflict appear. She looks at the guidebook for each of five distinctively different locations -- Idaho, New York City, North Carolina, Missouri, and U. S. One and the Oregon Trail--to assess the editorial plotting of such issues as gender, race, ethnicity, and class.

As regionalists jostled with federal officialdom, the faultlines of the project gaped open. Spotlighting the controversies between federal and state bureaucracies, Bold concludes that the image of America that the WPA fostered is closer to fabrication than to actuality. Christine Bold is director of the Centre for Cultural Studies and an associate professor of English at the University of Guelph in Guelph, Ontario.