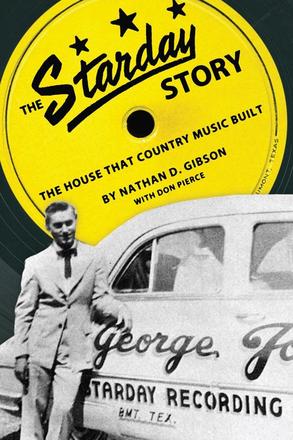 The House That Country Music Built

The Starday Story: The House That Country Music Built is the first book entirely dedicated to one of the most influential music labels of the twentieth century. In addition to creating the largest bluegrass catalogue throughout the 1950s and '60s, Starday was also known for its legendary rockabilly catalogue, an extensive Texas honky-tonk outpouring, classic gospel and sacred recordings, and as a Nashville independent powerhouse studio and label.

Written with label president and co-founder Don Pierce, this book traces the label's origins in 1953 through the 1968 Starday-King merger. Interviews with artists and their families, employees, and Pierce contribute to the stories behind famous hit songs, including "Y'all Come," "A Satisfied Mind," "Why Baby Why," "Giddy-up Go," "Alabam," and many others. Gibson's research and interviews also shed new light on the musical careers of George Jones, Arlie Duff, Willie Nelson, Roger Miller, the Stanley Brothers, Cowboy Copas, Red Sovine, and countless other Starday artists. Conversations with the children of Pappy Daily and Jack Starns provide a unique perspective on the early days of Starday, and extensive interviews with Pierce offer an insider glance at the country music industry during its golden era.

Weathering through the storm of rock and roll and, later, the Nashville Sound, Starday was a home to traditional country musicians and became one of the most successful independent labels in American history. Ultimately, The Starday Story is the definitive record of a country music label that played an integral role in preserving our nation's musical heritage.