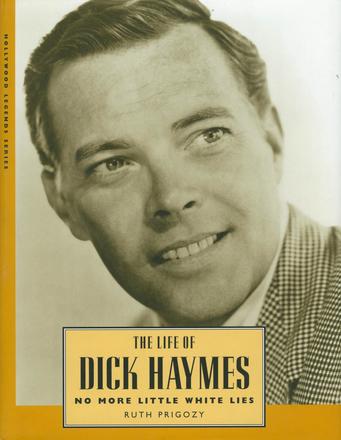 A biography of the superstar crooner, his rise, fall, and struggle for a second act

There was a time when no one would have left Dick Haymes (1918–1980) out of the top class of such contemporaries as Frank Sinatra and Perry Como. But now the Argentine-born baritone is known only to those ardent fans and music historians who still claim him as one of the most talented popular singers of the twentieth century.

Haymes worked with several great bandleaders, including Benny Goodman and Tommy Dorsey, before beginning a solo career that vaulted him to Hollywood stardom. In 1944, he worked with Twentieth Century-Fox, headlining such hit musicals as Billy Rose’s Diamond Horseshoe and State Fair. Such popular recordings as “Little White Lies”; “The More I See You”; “How Blue the Night”; “For You, For Me, For Evermore”; “Speak Low”; and “Another Night Like This” made him a top draw at the box office.

In the 1950s, when television took over the media landscape and the appeal of musicals declined, Haymes’s career suffered. Despite efforts in the 1970s, he never reestablished success. In The Life of Dick Haymes: No More Little White Lies, Ruth Prigozy uses over forty personal interviews with singers, musicians, composers, arrangers, and Haymes’s family members. She searches archival recordings of The Dick Haymes Show, films, recordings, music studies, and histories to present a full portrait of this complicated man. Prigozy chronicles Haymes’s childhood, his rise in the 1940s, his decline into alcoholism, his multiple marriages and divorces (among them to such leading stars as Rita Hayworth and Joanne Dru), and the minor resurgence of his career in Europe during the last years of his life.