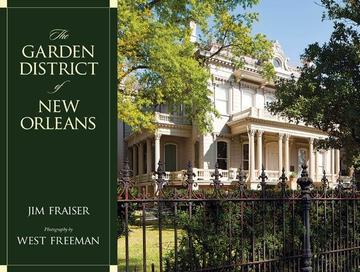 The Garden District of New Orleans

The Garden District of New Orleans has enthralled residents and visitors alike since it arose in the 1830's with its stately white-columned Greek Revival mansions and double-galleried Italianate houses decorated with lacy cast iron. Photographer West Freeman evokes the romance of this elegant neighborhood with lovely images of private homes, dazzling gardens, and public structures. Author Jim Fraiser vividly details the historical significance and architectural styles of more than a hundred structures and chronicles both the political and cultural evolution of the neighborhood.

In words and photographs, Fraiser and Freeman explore the unexpected evolution of this district and reveal how war, plagues, politics, religion, cultural conflict, and architectural innovation shaped the incomparable Garden District.

Other Books By Jim Fraiser or West Freeman

The French Quarter of New Orleans