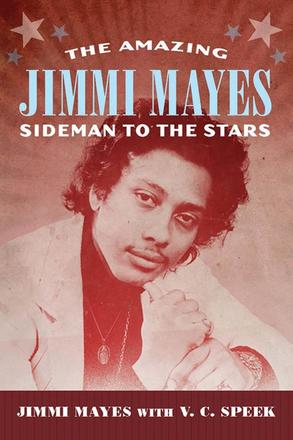 Sideman to the Stars

The unforgettable life story of one amazing musician touring and playing with Jimi Hendrix, Jimmy Reed, Marvin Gaye, and many more

For more than fifty years, Chicago drummer Jimmi Mayes served as a sideman behind some of the greatest musicians and musical groups in history. He began his career playing the blues in the juke joints of Mississippi, sharpened his trade under the mentorship of drum legends Sam Lay and Fred Below in the steamy nightclubs of south Chicago, and hit it big in New York City behind such music legends as Tommy Hunt from the Flamingos, Marvin Gaye, and James Brown.

Mayes played his drums behind blues giants Little Walter Jacobs, Jimmy Reed, Robert Junior Lockwood, Earl Hooker, Junior Wells, Pinetop Perkins, and Willie "Big Eyes" Smith. He lived for a while with Motown sensation Martha Reeves and her family and traveled with the Shirelles and the Motown Review. Jimi Hendrix was one of Mayes's best friends, and they traveled together with Joey Dee and the Starliters in the mid-1960s.

Mayes lived through racial segregation, the civil rights movement of the 1960s, the integration of rock bands, and the emergence of Motown. He personally experienced the sexual and moral revolutions of the sixties, was robbed of his musical royalties, and survived a musical drought. He's been a pimp and a drug pusher--and lived to tell the tale when so many musicians have not. This sideman to the stars witnessed music history from the best seat in the house--behind the drum set.

"As you read this book, it is easy to envision the story of Jimmi Mayes being retold on the big screen. All the elements are there for a movie production—the lure of bright lights, compelling music, sex, drugs, and plenty of star power. At the end, you wish that Mayes had been more forthcoming with his tales so that the book stretched out for another hundred pages. This fascinating saga makes it clear that Mayes was indeed a sideman to the stars. Definitely recommended!"

"[H]is story is that of a man who has spent most of his life celebrating—music, friendship, good times—and that’s the tone that permeates his book. He sometimes still seems almost awestruck at the breaks he’s gotten, the opportunities he’s had, and the people he’s known and worked with. Mostly, though, he radiates a deep, hard-won contentment."