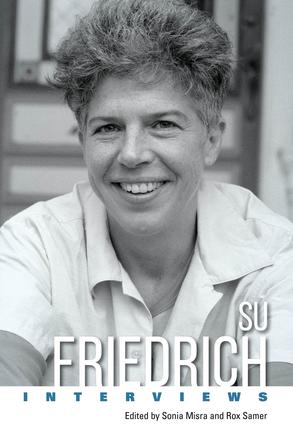 A collection of interviews with the acclaimed avant-garde filmmaker whose innovations of narrative, documentary, and experimental style explore the roles of gender, family, and sexuality in contemporary America

Su Friedrich: Interviews is the first volume dedicated exclusively to Friedrich and her work. The interviews collected here highlight the historical, theoretical, political, and economic dimensions through which Friedrich’s films gain their unique and defiantly ambiguous identity. The collection seeks to give a comprehensive view of Friedrich’s diverse body of work, the conditions in which her films were made, and how they have circulated and become understood within different contexts.

The volume contains fifteen interviews—two previously unpublished—along with three autobiographical writings by Friedrich. Included are canonical early interviews, but a special focus is given to interviews that address her less-studied film production in the twenty-first century. Echoing across these various pieces is Friedrich’s charmingly sardonic and defiant personality, familiar from her films. Her occasional resistance to an interviewer’s line of questioning opens up other, unexpected lines of inquiry as it also provides insight into her distinct philosophy. The volume closes with a new interview conducted by the editors, which illuminates areas that remain latent or underdiscussed in other interviews, including Friedrich’s work as a film professor and projects that supplement Friedrich’s filmmaking, such as Edited By, an online historical resource dedicated to collecting information about and honoring the contributions of women film editors.

"The final interview is about the best exposition of an artist’s work in my memory. It’s just so interesting to read how articulate Su is about the complexities and range of her interests, including her generosity to others not directly involved with it."