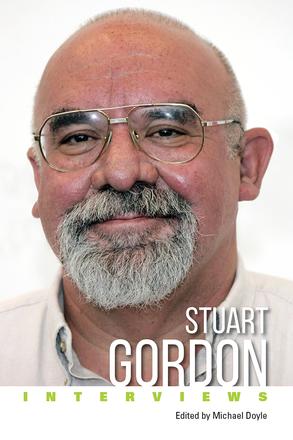 The first collection of interviews with the horror film icon known for directing Re-Animator, From Beyond, and Dolls

Animated by a singularly subversive spirit, the fiendishly intelligent works of Stuart Gordon (1947–2020) are distinguished by their arrant boldness and scab-picking wit. Provocative gems such as Re-Animator, From Beyond, Dolls, The Pit and the Pendulum, and Dagon consolidated his fearsome reputation as one of the masters of the contemporary horror film, bringing an unfamiliar archness, political complexity, and critical respect to a genre so often bereft of these virtues. A versatile filmmaker, one who resolutely refused to mellow with age, Gordon proved equally adept at crafting pointed science fiction (Robot Jox, Fortress, Space Truckers), sweet-tempered fantasy (The Wonderful Ice Cream Suit), and nihilistic thrillers (King of the Ants, Edmond, Stuck), customarily scrubbing the sharply drawn lines between exploitation and arthouse cinema.

The first collection of interviews ever to be published on the director, Stuart Gordon: Interviews contains thirty-six articles spanning a period of fifty years. Bountiful in anecdote and information, these candid conversations chronicle the trajectory of a fascinating career—one that courted controversy from its very beginning. Among the topics Gordon discusses are his youth and early influences, his founding of Chicago’s legendary Organic Theatre (where he collaborated with such luminaries as Ray Bradbury, Kurt Vonnegut, and David Mamet), and his transition into filmmaking where he created a body of work that injected fresh blood into several ailing staples of American cinema. He also reveals details of his working methods, his steadfast relationships with frequent collaborators, his great love for the works of Lovecraft and Poe, and how horror stories can masquerade as sociopolitical commentaries.

"Stuart Gordon: Interviews gives readers a sense of what it would be like to sit down across a table from the director: a warm, funny person who liked to push the envelope. If you’re a fan of his films, this book is a must-read."

"It’s hard to think of a genre filmmaker today capable of going so far out on the ledge of bad taste while maintaining an artistic skill that ranks them with the best of the horror masters. In this sense, Stuart Gordon remains one-of-a-kind: an auteur well deserving of the royal treatment this collection bestows upon his oeuvre."