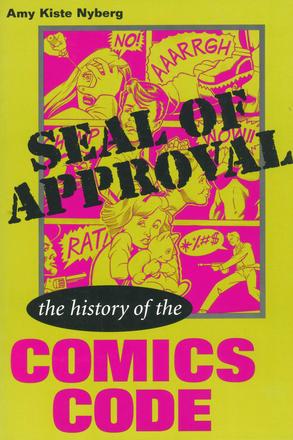 The History of the Comics Code

A study that explores the history of comic book censorship

For the past forty years the content of comic books has been governed by an industry self-regulatory code adopted by publishers in 1954 in response to public and governmental pressure.

This book examines why comic books were the subject of controversy, beginning with objections that surfaced shortly after the introduction of modern comic books in the mid-1930s, when parents and teachers accused comic books of contaminating children's culture and luring children away from more appropriate reading material.

It traces how, in the years following World War II, the criticism of comic books shifted to their content, and the reading of comic books became linked with the rise of juvenile delinquency. This resulted in attempts at the local, state, and national level to ban or license comic book sales.

A major figure in the crusade against comic books was the psychiatrist Dr. Fredric Wertham. While he played a significant role in the postwar attack on comics, his accusations against the comic book industry have been misunderstood by comic book fans and media scholars alike. They have accused him of being a naive social scientist who saw direct causal links between the reading of comic books and delinquency. In fact, Seal of Approval shows that Wertham's work is much better understood in the intellectual tradition of media criticism of the Frankfurt school and their critique of mass culture.

The negative publicity aroused by the controversy, coupled with fears that the government would pass censorship legislation, led publishers to adopt the self-regulatory code. It has been changed only twice, once in 1971 and again in 1989.

The legacy of the comics code is that it continues to define the comic book medium as essentially juvenile literature. While the code offers protection against those who attack the media (and not just comic books), it also reaffirms the public perception of comic books as children's fare. As a result, the comic book has yet to achieve legitimation as a unique form of expression that blends words and pictures in a way that no other medium can duplicate.

In tracing the evolution of the controversy and the resulting code, Seal of Approval examines important issues about children, media effects, and censorship. It is the first book-length scholarly study of this period of comic book history.