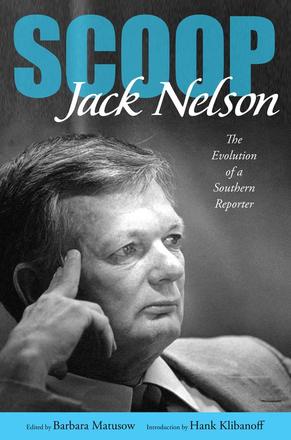 The Evolution of a Southern Reporter

From a gullible cub reporter with the Daily Herald in Biloxi and Gulfport, to the pugnacious Pulitzer Prize winner at the Atlanta Constitution, to the peerless beat reporter for the Los Angeles Times covering civil rights in the South, Jack Nelson (1929-2009) was dedicated to exposing injustice and corruption wherever he found it. Whether it was the gruesome conditions at a twelve-thousand-bed mental hospital in Georgia or the cruelties of Jim Crow inequity, Nelson proved himself to be one of those rare reporters whose work affected and improved thousands of lives.

His memories about difficult circumstances, contentious people, and calamitous events provide a unique window into some of the most momentous periods in southern and U. S. history. Wherever he landed, Nelson found the corruption others missed or disregarded. He found it in lawless Biloxi; he found it in buttoned-up corporate Atlanta; he found it in the college town of Athens, Georgia. Nelson turned his investigations of illegal gambling, liquor sales, prostitution, shakedowns, and corrupt cops into such a trademark that honest mayors and military commanders called on him to expose miscreants in their midst.

Once he realized that segregation was another form of corruption, he became a premier reporter of the civil rights movement and its cast of characters, including Martin Luther King Jr. , Stokely Carmichael, Alabama's Sheriff Jim Clarke, George Wallace, and others. He was, through his steely commitment to journalism, a chronicler of great events, a witness to news, a shaper and reshaper of viewpoints, and indeed one of the most important journalists of the twentieth century.

Scoop stands as a valuable contribution to understanding the role played by courageous journalists in not only covering but shaping the civil rights story during a long night of terror in Old Dixie.

Jack Nelson was a champion of 'openness' and held himself to the same standards he expected of government and politicians. It's not surprising, then, that he was the first journalist to allow C-SPAN cameras to capture an inside view of his Washington bureau. Jack was entirely comfortable letting the public see how the news sausage was made—a spirit captured once again in his revealing posthumous memoir, Scoop.

Jack Nelson was an eyewitness to one of the most significant political and economic transformations of the twentieth century. He was also a daring reporter, unafraid to confront powerful political leaders who resisted that change with force. In writing this book, Jack shares a piece of southern, American, and journalism history that will inspire generations yet unborn.

Horatio Alger never invented a hero more talented or indomitable than Jack Nelson was in real life. Jack started as a newsboy and became one of twentieth-century America's greatest journalists. This cannot-put-it-down book--brilliantly edited by his wife, Barbara Matusow--tells his unforgettable story.

- Gene Roberts, winner, with Hank Klibanoff, of the Pulitzer Prize in History for their book The Race Beat. Roberts was executive editor of the Philadelphia Inquirer and managing editor of the New York Times

A terrific memoir by one of America's toughest and greatest reporters.

Jack Nelson and my father had an interesting relationship that early on found them as spirited adversaries. I know that as time passed my father developed a deep respect and affection for Jack Nelson, and the correspondence my father had with Jack in his later years was very meaningful to him. Scoop: The Evolution of a Southern Reporter is riveting and will take the reader on a journey back in time as it chronicles social changes in our country and culture. Many of Jack Nelson's revelations in his writing, I believe, stirred the conscience of our nation as his voice called for justice and to nurture our common humanity. To fully understand how far we have come as a nation and people Scoop is a must-read.

Jack Nelson was one of the journalists who were responsible for the collapse of de jure segregation. Southerners, born into a long-segregated society, ultimately recognized that system was indefensible and undesirable. Desegregation happened sooner because of the perceptive and persistent writings of first-class reporters like Jack Nelson.

This story is bold and brilliant--just as Jack Nelson was. We miss him and miss the open, honest journalism he practiced. Jack was one of that small band who told the country what the South was really like--at risk to his own life and limb.

It's impossible to write honestly about the civil rights movement without evoking Jack Nelson's sterling byline. In Scoop, you will learn about his friendship with presidents, his passion for civil rights, and how he always seemed one step ahead of the other great reporters of his day. This is a marvelous memoir full of wit, insight, and guts.

- Douglas Brinkley, professor of history at Rice University and author of Cronkite

Hardscrabble southern by birth, hard-nosed investigator by nature, Jack Nelson was the best of the best--a reporter's reporter who gave ground to no one. Scoop, this memoir pulled together posthumously with love and dedication by his widow, Barbara Matusow, reminds us of what journalism can be and what it always should be. Jack's enemies were legion; so were his sources, but the public interest he served outweighed them all.

Journalism is history. This book about the early life of Jack Nelson, a great journalist for the Atlanta Constitution and Los Angeles Times, among others, will give you new insights into reporting, the civil rights movement, government, and growing up in the South. Look at the chapter titles: The Meanest Town in the South, The Orangeburg Massacre, Ambush in Meridian, Sin in the Classic City, Harvard Man, and many others that will make you sit up in your chair. The wow factor is big.

As captured in his splendid memoir, Jack Nelson exemplified the very best in American journalism. There simply was no stronger, more tenacious investigative reporter in print or in television news. His reporting for the Atlanta Constitution and Los Angeles Times was world class. As Washington bureau chief, he led the Times to heights of excellence.

In his new memoir, Scoop: The Evolution of a Southern Reporter, Jack Nelson describes his remarkable reporting career. In this intriguing account, as I knew him to be, Jack Nelson was inquisitive, incisive, and fearless. He went into unknown and sometimes dangerous territories in Georgia and was never hesitant to arouse the animosity of special interests or the politically powerful.

Although he was a personal friend of mine, he was never hesitant to criticize me severely, and I think sometimes maybe excessively. But when Jack Nelson wrote something, anybody who read it would know it was accurate, balanced, and truthful.

Whether he was raking through the muck of government coverage, tracking George Wallace and Martin Luther King Jr. , or bringing presidents to their knees, Jack Nelson's drive and personal courage made him an unmatched journalist. From Gee's Bend, Alabama, and Bogalusa, Louisiana, to Washington's marble halls, this memoir stands as an engaging and insightful journey into America's struggles with itself. It is a gift.

While he was given 'Scoop' as a nickname when a cub reporter, Jack Nelson grew to be a lion in journalistic circles by scoring one major scoop after another. He became one of the twentieth century's best--and most respected--reporters, and this posthumous memoir is testament to the moral force he brought to his profession. Though Jack died before he completed the book, it has a dramatic end: his feud with the feared FBI director J. Edgar Hoover, who called Nelson a 'jackal. ' Jack never backed down; he described Hoover as a 'chiseling, vindictive autocrat. '

Other Books By Jack Nelson, Barbara Matusow, and Hank Klibanoff

Assassins, Eccentrics, Politicians, and Other Persons of Interest