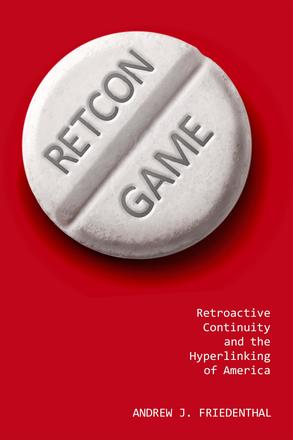 Retroactive Continuity and the Hyperlinking of America

The superhero Wolverine time travels and changes storylines. On Torchwood, there's a pill popped to alter memories of the past. The narrative technique of retroactive continuity seems rife lately, given all the world-building in comics. Andrew J. Friedenthal deems retroactive continuity, or “retconning,” as a force with many implications for how Americans view history and culture.

Friedenthal examines this phenomenon in a range of media, from its beginnings in comic books and now its widespread shift into television, film, and digital media. Retconning has reached its present form as a result of the complicated workings of superhero comics. In comic books and other narratives, retconning often seems utilized to literally rewrite some aspect of a character's past, either to keep that character more contemporary, to erase stories from continuity that no longer fit, or to create future story potential.

From comics, retconning has spread extensively, to long-form, continuity-rich dramas on television, such as Buffy the Vampire Slayer, Lost, and beyond. Friedenthal explains that in a culture saturated by editable media, where interest groups argue over Wikipedia pages and politicians can immediately delete questionable tweets, the retcon serves as a perfect metaphor for the ways in which history, and our access to information overall, has become endlessly malleable.

In the first book to focus on this subject, Friedenthal regards the editable Internet hyperlink, rather than the stable printed footnote, as the de facto source of information in America today. To embrace retroactive continuity in fictional media means accepting that the past itself is not a stable element, but rather something constantly in contentious flux. Due to retconning's ubiquity within our media, we have grown familiar with narratives as inherently unstable, a realization that deeply affects how we understand the world.

"Associational nonfiction about the use of retroactive continuity, or retconning, to change the worlds of comics, TV series, and other media, with some mention of its use in literary SF and fantasy. The use of editable hyperlinks online—notably in Wikipedia, which helps emphasize the idea that history is not set—is also discussed. "

"As both an introduction to the subject and a broaching of an interdisciplinary approach, Retcon Game is a substantial addition to comics studies. "

"Andrew Friedenthal's Retcon Game: Retroactive Continuity and the Hyperlinking of America is the best look at retroactive continuity currently available; thoughtful, succinct, and very readable, this book should be of interest not only to fans of comics but anyone interested in canonicity, the growth of imaginary worlds, or contemporary popular culture in general. "