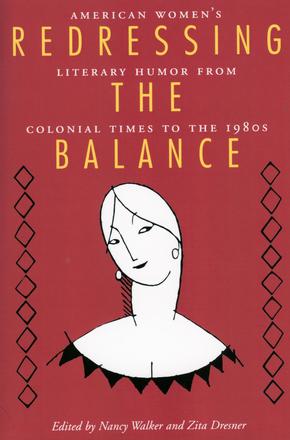 American Women's Literary Humor from Colonial Times to the 1980s

The first comprehensive anthology of American women’s humorous writings, a collection that reclaims the tradition of female humor in America, from witty observations in the eighteenth century to humorous essays of contemporary women

Redressing the Balance: American Women's Literary Humor from Colonial Times to the 1980s gives new focus to the wide field of humor is the first comprehensive anthology of American women's humorous writing. The editors have included works by such well-known writers as Dorothy Parker, Phyllis McGinley, and Gertrude Stein as well as by once-popular but forgotten authors such as Frances Whitcher, Carolyn Wells, Alice Duer Miller, and Florence Guy Seabury.

Indeed, one of the purposes of the anthology is to reclaim the tradition of women's humor in America, from the witty observations of Sarah Kemble Knight in the early eighteenth century to humorous essays on contemporary American society by Victoria Geng and Gail Sausser. Included are feminist political satires, literary parody, light verse, and domestic humor by more than fifty American women during a period of more than three hundred years. The collection provides ample evidence that women—white and black, urban and rural, newspaper columnists and fiction writers—have taken note of the absurdities and incongruities of American life, particularly as these have affected their lives because they are women.

A strong current of feminist protest runs throughout the anthology, not only in the work of avowed feminists such as Marietta Holley and Charlotte Perkins Gilman, but also in portraits of strong, assertive women such as Mary Roberts Rinehart's “Tish” and distraught housewives such as the narrator in Betty MacDonald's The Egg and I. The issues these writers explore are those familiar to the women's movement: women's economic and political subordination, the sexual double standard, lack of self-definition and autonomy, and the frustrations of homemaking and earning a living.

The editors find that this collection forces a reevaluation of the tradition of American humor and American literature by demonstrating that the subjects of American humor have derived not merely from the public, male arena, but also from the private, domestic world that women have typically inhabited, from the frontier to the kitchens of suburbia. The editors have provided an introductory chapter that identifies the major themes and concerns of American women's humor, and each selection is preceded by a biographical/bibliographical introduction that places the author in historical context.