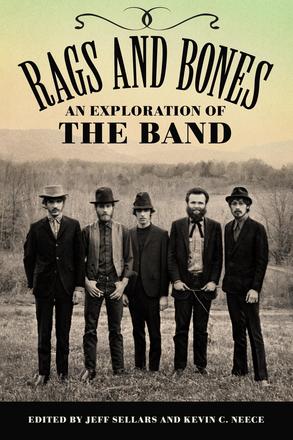 An Exploration of The Band

After performing with Ronnie Hawkins as the Hawks (1957–1964), The Band (Rick Danko, Garth Hudson, Richard Manuel, Robbie Robertson, and Levon Helm) eventually rose to fame in the sixties as backing musicians for Bob Dylan. This collaboration with Dylan presented the group with a chance to expand musically and strike out on their own. The Band’s fusion of rock, country, soul, and blues music—all tinged with a southern flavor and musical adventurousness—created a unique soundscape. The combined use of multiple instruments, complex song structures, and poetic lyrics required attentive listening and a sophisticated interpretive framework. It is no surprise, then, that they soon grew to be one of the biggest bands of their era.

In Rags and Bones: An Exploration of The Band, scholars and musicians take a broad, multidisciplinary approach to The Band and their music, allowing for examination through sociological, historical, political, religious, technological, cultural, and philosophical means. Each contributor approaches The Band from their field of interest, offering a wide range of investigations into The Band’s music and influence.

Commercially successful and critically lauded, The Band created a paradoxically mythic and hauntingly realistic lyrical landscape for their songs—and their musicianship enlarged this detailed landscape. This collection offers a rounded examination, allowing the multifaceted music and work of The Band to be appreciated by audiences old and new.

"It’s about time there was a solid collection of essays on The Band. The essays here are informative, engaging, and lucidly written. It’s enjoyable as well as insightful. An excellent collection."