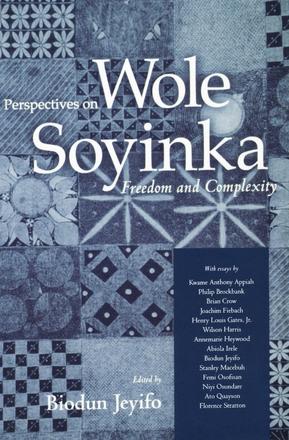 This collection of the most significant and illuminating critical essays about the works of Wole Soyinka over the past three decades is evidence of the international esteem he has achieved. This Nobel Prize winner from Nigeria is arguably Africa's greatest living writer. His novels and plays are appreciated throughout the world. His works have attracted the attention of such acclaimed authors and critics as Wilson Harris, Henry Louis Gates, Jr. , Kwame Anthony Appiah, as well as such leading academicians as Philip Brockbank, Joachim Fiebach, Abiola Irele, Femi Osofisan, and Niyi Osundare.

An essay by each of these is included in this volume. Nearly every major contemporary school of critical theory is represented here-from analytic philosophy to reconstructed Marxism, from poststructuralism to postcoloniality, and from feminism to recuperated phenomenology. This diversity of theoretical interests and interpretive approaches unites Soyinka's art with his political activism.

Gathered here in this remarkable collection, the essays simultaneously showcase Soyinka's postcolonial politics and his literary aestheticism. They reveal the irony that the downtrodden peoples whom Soyinka champions are those who cannot read his stirring books or see his compelling dramas.

Biodun Jeyifo was Soyinka's student, junior colleague, and even, Jeyifo says, his "adversary in the ferocious intramural ideological debates within the community of African leftist writers, critics, and academics in the seventies and eighties. "

"This book," Jeyifo writes in his introduction, "is the product of [an] extensive review of the scholarly aspects of the reception of Soyinka in the last three decades of his career as one of the most influential of writers of Africa. "

This volume will afford Soyinka's readers a heightened sense of the wit, humor, and eloquence of this leading writer-activist of Africa and the English-speaking world.

Biodun Jeyifo is a professor of English at Cornell University. He is the author of The Popular Traveling Theatre of Nigeria and The Truthful Lie.

Other Books By Biodun Jeyifo