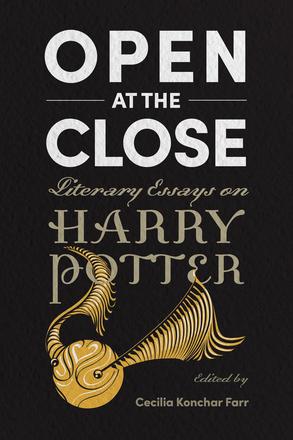 Despite their decades-long, phenomenal success, the Harry Potter novels have attracted relatively little attention from literary critics and scholars. While popular books, articles, blogs, and fan sites for general readers proliferate, and while philosophers, historians, theologians, sociologists, psychologists, and even business professors have taken on book-length studies and edited essay collections about Harry Potter, literature scholars, outside of the children’s books community, have paid few serious visits to the Potterverse. Could it be that scholars are still reluctant to recognize popular novels, especially those with genre labels “children’s literature” or “fantasy,” as worthy subjects for academic study?

This book challenges that oversight, assembling and foregrounding some of the best literary critical work by scholars trying to move the needle on these novels to reflect their importance to twenty-first-century literary culture. In Open at the Close, contributors consciously address Harry Potter primarily as a literary phenomenon rather than a cultural one. They interrogate the novels on many levels, from multiple perspectives, and with various conclusions, but they come together around the overarching question: What is it about these books? At their heart, what is it that makes the Harry Potter novels so exceptionally compelling, so irresistible to their readers, and so relevant in our time?

"Open at the Close has the potential to shift the currents in literary scholarship and Harry Potter studies alike."

"Before your next reread of the Harry Potter series, read this book! It is guaranteed to guide readers into a deeper understanding of the Harry Potter books’ enduring legacy while challenging readers to look at the ‘real’ world in a more meaningful and critical way."

"Open at the Close is both an intellectually and emotionally stimulating read, probing the depths of the Harry Potter novels to uncover the appealing, comforting, disturbing, and confusing aspects that keep us not only rereading but still thinking and talking about these books years after their release."

"A simply 'must read' for the legions of Harry Potter fans, Open at the Close: Literary Essays on Harry Potter is a compilation of 15 erudite, informative, thought-provoking essays."