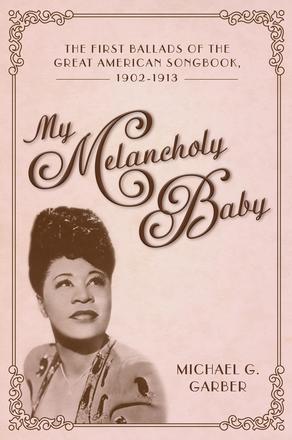 Ten songs, from “Bill Bailey, Won’t You Please Come Home” (1902) to “You Made Me Love You” (1913), ignited the development of the classic pop ballad. In this exploration of how the style of the Great American Songbook evolved, Michael G. Garber unveils the complicated, often-hidden origins of these enduring, pioneering works. He riffs on colorful stories that amplify the rising of an American folk art composed by innovators both famous and obscure. Songwriters, and also the publishers, arrangers, and performers, achieved together a collective genius that moved hearts worldwide to song.

These classic ballads originated all over the nation—Louisiana, Colorado, Illinois, Michigan—and then the Tin Pan Alley industry, centered in New York, made the tunes unforgettable sensations. From ragtime to bop, cabaret to radio, new styles of music and modes for its dissemination invented and reinvented the intimate, personal American love ballad, creating something both swinging and tender. Rendered by Frank Sinatra, Ella Fitzgerald, and a host of others, recordings and movies carried these songs across the globe.

Using previously underexamined sources, Garber demonstrates how these songs shaped the music industry and the lives of ordinary Americans. Besides covering famous composers like Irving Berlin, this history also introduces such little-known figures as Maybelle Watson, who had to sue to get credit and royalties for creating the central content of the lyric for “My Melancholy Baby. ” African American Frank Williams contributed to the seminal “Some of These Days” but was forgotten for decades. The ten ballads explored here permanently transformed American popular song.

"My Melancholy Baby: The First Ballads of the Great American Songbook, 1902–1913 is original, extremely well researched, and builds significantly on earlier studies of the Tin Pan Alley era. The narrative Michael G. Garber constructs is convincing and adds a new dimension to our knowledge of the history of the genre. "

"Michael G. Garber’s splendid critique on the evolution of the torch song (love ballad) focuses on ten musical gems from 1902 to 1913, analyzed with regard to their history, music, lyrics, recordings, and utilization in plays, movies, and literature. It is a fascinating journey into the world of American popular music, underscored by the author’s thorough documentation and in-depth knowledge of all facets of the industry. "

- Richard M. Raichelson, author of Orlando R. Marsh: Chicago’s Pioneer of Electrical Recording and Beale Street Talks: A Walking Tour Down the Home of the Blues

"In spotlighting enduring works by songsmiths today forgotten—and even in their day frequently hardly known—[Garber] is persuasive that they are an important part of our musical heritage."