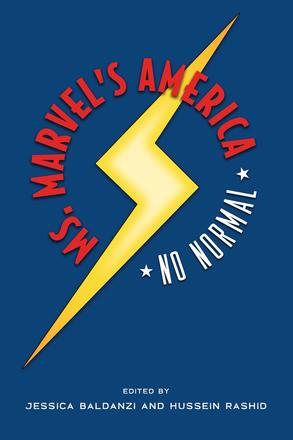 A Conversation about the new book MS. MARVEL'S AMERICA from University Press of Mississippi on Vimeo.

An in-depth exploration of the current Ms. Marvel, Kamala Khan

Mainstream superheroes are becoming more and more diverse, with new identities for Spider-Man, Captain America, Thor, and Iron Man. Though the Marvel-verse is becoming much more racially, ethnically, and gender diverse, many of these comics remain shy about religion.

The new Ms. Marvel, Kamala Khan, is a notable exception, not only because she is written and conceived by two women, Sana Amanat and G. Willow Wilson, but also because both of these women bring their own experiences as Muslim Americans to the character.

This distinct collection brings together scholars from a range of disciplines including literature, cultural studies, religious studies, pedagogy, and communications to engage with a single character, exploring Khan’s significance for a broad readership. While acknowledged as the first Muslim superhero to headline her own series, her character appears well developed and multifaceted in many other ways. She is the first character to take over an established superhero persona, Ms. Marvel, without a reboot of the series or death of the original character. The teenager is also a second-generation immigrant, born to parents who arrived in New Jersey from Pakistan.

With essays from and about diverse voices on an array of topics from fashion to immigration history to fandom, this volume includes an exclusive interview with Ms. Marvel author and cocreator G. Willow Wilson by gender studies scholar Shabana Mir.

"Teenaged Pakistani American Kamala Khan, a. k.a. Ms. Marvel, is unapologetically Muslim in a low-key Jersey way. Ripe for interpreting, she's the superhero everyone wants to think with, whether the subject is US imperialism, Islam and gender, race and racism in America, or diversity in comics. This interdisciplinary collection, ably edited by Jessica Baldanzi and Hussein Rashid, is wide-ranging and very smart. I highly recommend it. "

- Kecia Ali, professor of religion at Boston University and author of Sexual Ethics and Islam: Feminist Reflections on Qur’an, Hadith, and Jurisprudence

"[Ms. Marvel's America: No Normal] plows the ground for a fertile new field of scholarship and opens up lanes of discourse for the continued discussion of the character and the reader’s response to her."

"Ms. Marvel’s America: No Normal, edited by Jessica Baldanzi and Hussein Rashid, is the first collection of criticism to take on, in an interdisciplinary way, the success and impact of Ms. Marvel. The book effectively makes the point that Kamala Khan and Ms. Marvel provide a rich ground for interpretation of America’s relationship with Islam, gender, race, and diversity in mainstream comics."