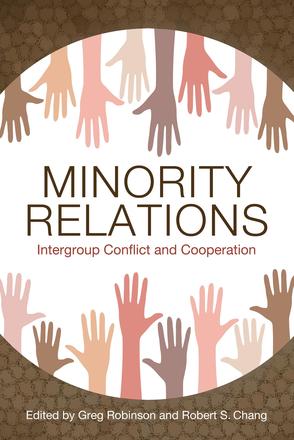 The question of how relations between marginalized groups are impacted by their common and sometimes competing search for equal rights has become acutely important. Demographic projections make it easy now to imagine a future majority population of color in the United States. Minority Relations: Intergroup Conflict and Cooperation sets forth some of the issues involved in the interplay among members of various racial, ethnic, and sexual minorities.

This collection strives to stimulate further thinking and writing by social scientists, legal scholars, and policymakers on inter-minority connections. Particularly, scholars test the limits of intergroup cooperation and coalition building. For marginalized groups, coalition building seems to offer a pathway to addressing economic discrimination and reaching some measure of justice with regard to opportunities. The need for coalitions also acknowledges a democratic process in which racialized groups face significant difficulty gaining real political power, despite such legislation as the Voting Rights Act.

"For anyone who has an interest in social justice movements or how to be an ally to people of color or who is involved in activist organizations that deal with interracial issues, this is key reading. "

"It’s an irony; nevertheless, racial minorities in the US have had a complex relationship in their quest for equality in the broadest sense of the word. Amid their cooperation lay strife and tension. The editors of this anthology bring together a ‘dream team’ of scholars to interrogate this phenomenon. The collection does not offer any quick fixes to the conflict-cooperation paradigm; yet, their provocative analyses will surely bring this aspect of racial minorities out of the closet. "

- Stephen Middleton, professor emeritus of history and former director of the African American Studies Program at Mississippi State University and coeditor of The Construction of Whiteness