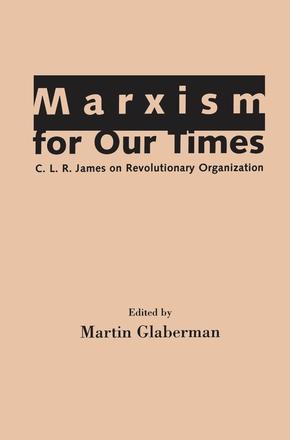 Marxism for Our Times

The writings of a Marxist at work

Rarely as in the collection here can one encounter an essayist, novelist, historian, and political leader like the late C. L. R. James in the working throes of forming and then fomenting personal political theory. In Marxism for Our Times, editor Martin Glaberman has gathered the writings and theoretical discussions of this noted Caribbean writer. These pamphlets, mimeographs, letters, and lectures by James were nearly inaccessible until now.

Within these works, James works to situate himself within the classical Marxist tradition while rejecting the Vanguard Party as unsuitable for our times. The writings in this collection begin in the 1940s, when Marxists were wrestling with acts that many deemed betrayals of the revolution, Stalin's pact with Hitler and the war in Europe. They end in the late sixties just before the dissolution of Facing Reality, the final form of the American Marxist organization founded on James's principles.

For many years James, born in Trinidad and Tobago, was leader of the Trotskyists in the United States. He continued his work even after his exile from America. Of great value to scholars of Marxism are the papers in which James examines Marx, Lenin, and Trotsky and applies their theories to the class conflicts he was witnessing at mid-century and to changes he foresaw in the future. James argues for the rejection of historical principles and theories and urges Marxists to adapt themselves to changes occurring in capitalism and the working class.

Glaberman worked alongside James but sometimes disagreed with him in the movement James founded. They were close associates for forty-five years. With Marxism for Our Times Glaberman not only has preserved and made available the political theories of a noted writer but he also has created a window on a turbulent period of optimism and failure, a failure Glaberman calls, “rich in meanings and lessons for anyone interested in a democratic, revolutionary Marxism. ”