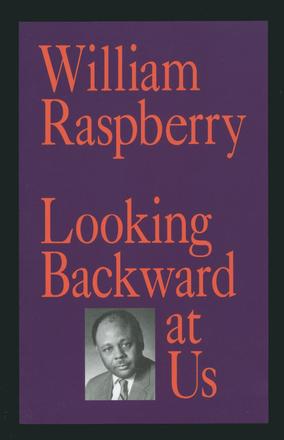 Looking Backward at Us

A collection of many of the best columns written by Washington Post columnist William Raspberry during the 1980s on American dilemmas in education, poverty, drugs, racism, parenting, and more

William Raspberry's syndicated columns give the voice of sanity to addressing some of the most controversial problems in America. Few Americans have tepid feelings about the multitude of subjects he assesses in his column in the Washington Post-- among them, education, poverty, drugs, racism, parenting. Because they are among our greatest concerns and because we are so deeply involved with them, we too often lack accurate perspective.

But in thirty-five or forty years perhaps we will have put many of these issues into sharper focus and will wonder why they raged during our times as our fiercest controversies. Perhaps in the retrospective view some of our attitudes will appear dated.

In this collection of more than fifty columns Raspberry faces a variety of the seemingly intractable problems that are the daily concerns of most Americans. He confronts them not with force but with reason. Included are subjects that are loaded with discord and heated opinion, columns about people and programs, justice and injustice, race and gender. To these Raspberry gives objectivity and balance, clarifying his own judgments and carrying the reader, sometimes step-by-step, to logical conclusions.

He writes about Louis Farrakhan and about Marion Barry, about the lack of response among black leaders to the mugging of the female jogger in Central Park, about prison overcrowding, about gay bashing, about black role models for black sons, about standard English, about legalization of drugs, about the decline of the family unit, about how blacks can help themselves. The theme that emerges from William Raspberry's columns is the importance of human responsibility and self-esteem. His comprehensive view of these eternal truths gives long-term perspective to topical matters that affect our immediate lives. "It would be nice," he said, "if we could learn to look at our present-day contentions from a viewpoint of future generations. "

William Raspberry describes his philosophy as neither liberal nor conservative. For his coverage of the Watts riot in 1965 the Capital Press Club named him Journalist of the Year. He is a native of Okolona, Mississippi, and has been a writer at the Washington Post since 1971.