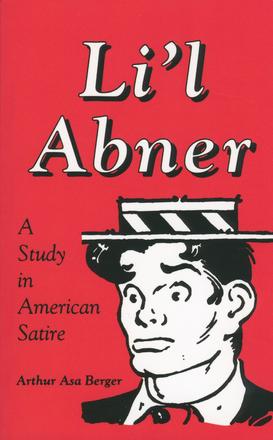 A Study in American Satire

Southwest literary humor and Yiddish humor collided in the ever-popular comic strip "Li'l Abner," From 1936 to 1977, when it ceased publication, this comic strip entertained, annoyed, riled, and amused legions of readers. Li'l Abner, Daisy Mae, Mammy and Pappy Yokum, Moonbeam McSwine, Marryin' Sam, and Sadie Hawkins became pillars in American popular culture, and Dogpatch became a symbol, an emblem, and a community in mainstream U. S.A.

The denizens of Dogpatch were destined for their place outside the frames of comic strips. They were popular subjects on stage and screen and eventually made their way into scholarly studies.

Li'l Abner: A Study in American Satire, the first such assessment, is made available again in this edition which includes a new afterword by the author. Originally published in 1969, it was the first full-length book devoted to a single American comic strip. It has remained a model of how the comics, sometimes snubbed as "culture for the common man," can be given earnest and well deserved analytical attention.

Here in great detail are discussions of the place of "Li'l Abner" in American satire, of Capp's narrative technique, his use of dialogue and grotesquerie, his use of self-caricature, and of the significance of social criticism and the pictorial image.