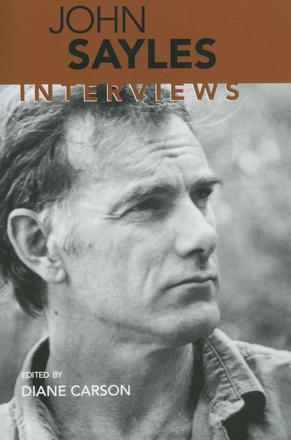 Nominated for both an Academy Award for scriptwriting and a National Book Award, John Sayles has written screenplays, teleplays, short stories, and novels and has worked as a script doctor for a virtual who's who of Hollywood film and television talent. He has acted in films and on stage and even directed a music video for Bruce Springsteen.

In making movies, Sayles has handled subjects as diverse as seventies activists in The Return of the Secaucus Seven (1980); a 1920s Appalachian miners' strike in Matewan (1987); the 1919 Black Sox scandal in Eight Men Out (1988); the Selkies of Ireland in The Secret of Roan Inish (1994); and Latin American guerilla warfare in Men with Guns (1997).

Conducted over a period of twenty years, these interviews span Sayles's career as a writer, director, and sometimes actor. Whether he is interviewed in The Progressive, Film Comment, Sight and Sound, or Rod Serling's The Twilight Zone Magazine, Sayles is always direct and candid. In each conversation, he cuts to the core of the film business and to the meat of what he is trying to accomplish as an artist.

Known for his fiercely independent vision, his authentic characters, and his provocative observations on the human condition, Sayles demonstrates in these interviews what an endurably original director and artist he is. As he tells Sight and Sound, "First of all, I'm not afraid of failure. I don't get upset if people don't like it. I'm doing it because I'm interested. . . [Return of the Secaucus Seven] was the start, because even if I hadn't got it released, at least I've made a movie I wanted to make."