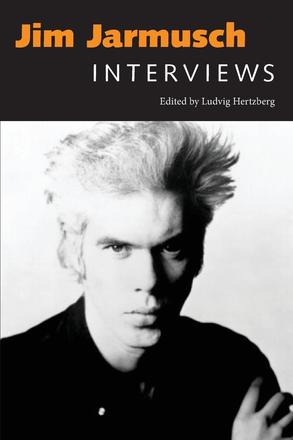 Collected interviews with the American independent film director of Permanent Vacation, Stranger Than Paradise, and Ghost Dog: The Way of the Samurai

Perhaps the most gifted and invigorating of the American independent film directors of the past two decades, Jim Jarmusch (b. 1953) has presented moviegoers with his uniquely personal vision, from his first feature film, Permanent Vacation (1980), to his latest, Ghost Dog: The Way of the Samurai (1999).

As the interviews in this volume reveal, Jarmusch has always been interested in mixing very different cultural ingredients to form something uncategorizably new in films that transcend the boundaries between high and low cultures. Jarmusch half-mockingly described his movie Stranger Than Paradise (1984), the film that first brought him substantial notice, as “a semi-neorealist black comedy in the style of an imaginary Eastern European film director obsessed with Ozu, and familiar with the 1950s American television show The Honeymooners. ”

His unique approach to movie making jump-started the low-budget American independent film movement with Stranger Than Paradise, which won the Camera d'Or for best first feature at the Cannes Film Festival.

Ranging from 1981 to 2000, this collection chronicles the career and sensibility of a thoroughly independent filmmaker. It features one previously unpublished interview, two that have never appeared in English, and another two which are presented in their entirety rather than in the abridged forms in which they were published.

Jarmusch discusses the actors with whom he has worked (Johnny Depp, Forest Whitaker, and Roberto Benigni among them), the progression of his camera and editing techniques, his fascination with the coexistence of disparate and often opposing cultures, and his cult status as an independent movie director. He comes across as kind, modest, and attentive, with a warm sense of humor and an ever-glowing affection for and dedication to his art, and for all the small and marginalized aspects of the world.