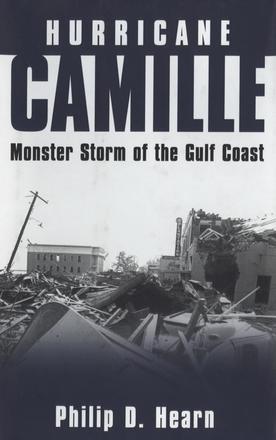 Monster Storm of the Gulf Coast

In the voices of its survivors, the history of one of America’s most devastating storms

On August 17, 1969, Hurricane Camille roared out of the Gulf of Mexico and smashed into Mississippi's twenty-six miles of coastline. Winds were clocked at more than 200 miles per hour, tidal waves surged to nearly 35 feet, and the barometric pressure of 26. 85 inches neared an all-time low. Survivors of the killer storm date events as BC and AC—Before Camille and After Camille.

The history of Hurricane Camille is told here through the eyes and the memories of those who survived the traumatic winds and tides. Their firsthand accounts, compiled a decade after the storm and archived at the University of Southern Mississippi, form the core of this book.

Property damage exceeded $1. 5 billion, $48. 6 billion in today's dollars. Fashionable beachfront homes, holiday hotels, marinas, night clubs, and souvenir shops were devastated. The death toll in the state's three coastal counties—Harrison, Hancock, and Jackson—reached 131, with another 41 persons never found. The rampaging storm then moved north through Tennessee, Kentucky, West Virginia, and Virginia and sparked flash floods that killed more than 100 in Virginia before moving into the Atlantic. Camille is one of only three Category 5 hurricanes ever to hit the U. S. mainland.

Along the Coast today, vacant lots, slabs of concrete, and mysterious staircases and driveways leading to nowhere are Camille's eerie reminders. The ruins that remain, however, are overshadowed by the dazzle and fun at the dozen casinos and high-rise hotels that dominate the modern beachfront. Once more the seashore is thriving. Rambling homes, the neon lights of motels and family restaurants, and the nets and masts of shrimp boats mark the skyline. For the Mississippi Coast, a historic retreat between New Orleans on the west and Mobile on the east—these are the best of times.

This gripping story of the Coast's most devastating storm recounts what happened on a terrifying night more than three decades ago. It reminds, too, what can happen again.

Hurricane Camille . . . reads like fine adventure fiction. That it is definitely nonfiction makes it all the more troubling and just downright good.

Hearn's account packs a great deal of punch and features a narrative style that makes it difficult to put the book down.

- Bulletin of the American Meteorological Society, May 2006

In the last chapter—'The Next Camille'—Hearn points out that it is not a matter of if, but when the next killer hurricane will hit the Coast.

Hearn brings readers a cinematic reconstruction of the devastating storm. . . . He still has a reporter's eye for precise detail.

What grips the reader by the throat are the oral histories taken from survivors.

Hearn builds an intriguing narrative out of the voices of Camille survivors.

While acknowledging broader policy concerns . . . Hearn focuses on the variety of human experiences during Camille and does that quite well.

With a little imagination, you'll feel as if you were actually present during that terrible night of death and destruction.